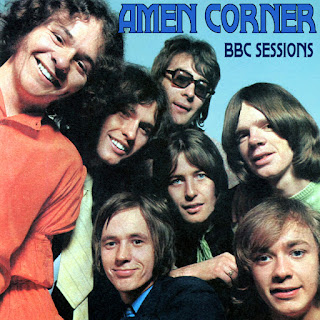 Next up with a BBC sessions album is the British band Amen Corner.

This band only existed from 1966 to 1969, but it had four top ten hits in Britain ("Bend Me, Shape Me," "High in the Sky," "(If Paradise Is) Half as Nice," and "Hello Susie"), plus one that came close ("Gin House Blues"). "(If Paradise Is) Half as Nice" made it all the way to number one. But they had no success at all in the US. The band's lead singer was Andy Fairweather Low. He would have a couple of solo hits in the 1970s before becoming a session musician.

This BBC album serves as a nice de facto "best of " album because it contains all their best known songs. Plus, as these sessions from this time period usually do, you get some interesting covers that the band never put on record: "Sgt. Pepper's Lonely Hearts Club Band," "Knock on Wood," "Day Tripper," and "The Duck."

In 1970, the band broke up when one member left. But the rest of them, including Andy Fairweather Low, continued for one album with the new name "Fair Weather." They had a top ten hit in Britain with the song "Natural Sinner." It so happens I found two BBC sessions that band did with that song plus two others, so I've added those to the end of this album.

As usual, BBC DJs talked over a bunch of their songs, the ones with "[Edit]" in their titles. That happened to 15 out of the 21 songs here. Sigh. Also as usual, I used the audio editing program X-Minus to wipe that talking while keeping the underlying music.

The sound quality is all the songs is excellent. None of these performances have been officially released, except on unauthorized "grey market" releases.

This album is an hour and one minute long.

UPDATE: On June 6, 2022, I updated the mp3 download file with one song I'd missed, "God Cried Mother." Thanks to Marley for sharing that one.

I don't know where or when the cover photo is from. But it was one of very few good color photos I was able to find at all, so there ya go.