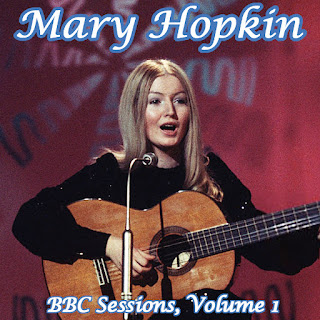 The BBC sessions keep on coming! This time, it's Mary Hopkin's turn. This is the first of two volumes.

British singer Mary Hopkin came out of nowhere in 1968 to have the worldwide smash hit "Those Were the Days." For the next three years or so, she was a big pop star, before basically retiring from the spotlight. She didn't put out much music during that time frame, releasing only two studio albums and a few singles. But it turns out she did a lot of songs for the BBC that she never put on record, and everything here remains officially unreleased.

All but one song here was recorded for the BBC. The one exception is "Love Is the Sweetest Thing," which was done for the Ed Sullivan TV show. Most of the BBC songs were done in typical BBC sessions.

However, the last six songs are different. Hopkin was such a big star that she was the host of a BBC TV series that lasted for six half-hour episodes. Each episode had a slightly different title, which showed the theme for that show. For instance, there are songs here from the shows "In the Land of... Films," "In the Land of... Legend," and "In the Land of... Theatre." So, for instance, in the "Films" episode she sang famous songs from movies, and in the "Theatre" episode she sang famous songs from musicals. The show was mainly aimed at children, and the other episodes were "Books," "Nursery Rhymes," and "Pantomime."

She sang about six songs per episode, and virtually all the songs done for this show were never done by Hopkin on record or even in concert. Unfortunately, it seems the vast majority of such performances have been lost. At least I was able to find and include six of them.

I didn't include any of the songs from that TV show in the stray tracks albums I made. Most of the rest of the songs are performances of her hits and album tracks and such. But some others are also exclusive here: "Can I Believe," 'You're Everything You Need," "All My Trials," and "Three Ships."

Six of the songs suffered from the usual BBC problem around this time of the DJs talking over the music (the ones with "[Edit]" in their titles). I did the usual thing of using the X-Minus audio editing program to wipe the talking while keeping the underlying music.

This album is 50 minutes long.

The cover photo shows Hopkin performing in Britain in 1968. I don't know any other details.