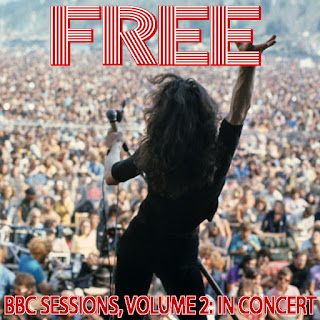 Here's the second of three volumes of Free at the BBC. The first and third ones are studio sessions. This second one consists entirely of songs done live before an audience.

I didn't put a date in the title, because the material here is from two BBC concerts, not one. The first four songs were done for "John Peel's Sunday Concert" in January 1970. This totals 22 minutes. The remaining seven songs are also for "John Peel's Sunday Concert," but in July 1970. This totals 35 minutes. Luckily, there are no duplicates in the two shows.

All the performances have been officially released on the album "Live at the BBC," so the sound quality is excellent. However, there are a couple of problems. One is that there is no banter between songs. I'm sure there was originally, probably BBC DJ serving as emcee. I don't know if the recordings of those weren't saved, or if there was an editorial decision not to include them on the official release. If anyone has more, let me know, and I'll add it in.

The second problem is one that I was able to fix:

The photo shows lead singer Paul Rodgers in front of a crowd at the Isle of Wight Festival in 1970.