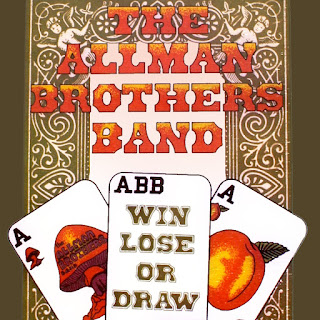 I've posted a bunch of albums dealing with the peak years of the Allman Brothers Band, 1969 to 1973, as well as the years leading up to then. But what happened to the band after that? I plan to post more albums to gather more of their best music. Next up is the band's 1975 album, "Win, Lose or Draw."

This is a pretty decent album in its officially released form. But it pales in comparison to all the classic albums the band released from 1969 to 1973. Unfortunately, the band suffered the typical problems of bands that made it big, such as inflated egos, lots of drugs, and too many distractions. And they got really big in 1973, especially when their song "Ramblin' Man" became a number one hit in the US. But their problems were compounded by the death of guitarist Duane Allman in 1971 and then bassist Berry Oakley in 1972. In many ways, the band never fully recovered from those blows.

By the time the band worked on "Win, Lose or Draw," they were barely a band at all. The two remaining stars, keyboardist and vocalist Gregg Allman, and guitarist and vocalist Dickey Betts, spent most of their creative energies in 1973 and 1974 on solo albums and tours and the like. Relations between Gregg Allman and the rest of the band were so bad that he was rarely in the recording studio with them, doing the bare minimum to get his lead vocals done. But he was hardly the only problem. The band didn't sound that together because they weren't. Furthermore, many of the best songs were saved for solo albums instead.

That's not to say the album doesn't have its moments. In my opinion, "Can't Lose What You Never Had" and "Win, Lose or Draw" are classic songs that should go on any decent sized best of album. But the album had some duds too. Unfortunately, two of the lesser songs, "Nevertheless" and "Louisiana Lou and Three Card Monty John," were chosen as the album's two singles. Needless to say, they didn't do well. Overall, the album was considered a disappointment, even though it made it to number five in the US album charts. Then, further problems between band members caused the band to break up entirely in early 1976. (They would get back together in 1979, but that's a story for another time.)

You can read even more about the troubles the band had recording the album in the Wikipedia entry on the album:

I believe I've made a much better version of this album, one that is worthy of standing with the albums that came before it, during their peak years. The official release is rather short, at only 38 minutes. I made it shorter still by removing the songs "Just Another Love Song" and "Louisiana Lou and Three Card Monty John," because I don't think they're worthy.

I also made significant edits to three songs. For "Can't Lose What You Never Had," I've always been frustrated by the ending. After the song cooks for five minutes, it seems to come to an end, only to have a surprise revival. However, that's brief, and the song fades out right when a guitar solo is wailing. I really wanted to hear more of that solo. In putting this together, I heard the excellent live version on the 1976 live album "Wipe the Windows, Check the Oil, Dollar Gas." It was recorded in Oakland in 1975. It goes on for almost another minute, so I've patched that extra part to the end of the studio version. To be honest, there isn't much more of that great solo, but I do like having the song come to a proper conclusion instead of fading out.

The edit to "Nevertheless" was a lot simpler. I was wavering about including this one or not. Then I realized the lead vocals were quite low. I used the audio editing program X-Minus to boost those vocals. That improved the song enough for me to decide to keep it.

My edit to the instrumental "High Falls" may be the most controversial. This is considered another highlight of the album by many. I agree that it's an excellent song. However, I take issue with the fact that it goes on for 14 minutes. That length would be fine in concert, or even on a different kind of album. But for an album that's only 38 minutes long total, it dominates things too much. Consider another great instrumental the band did, "In Memory of Elizabeth Reed." In concert, it was often stretched out to 20 or 30 minutes, but the actual studio album is just under seven minutes long.

So I edited "High Falls" down to a more reasonable length. It started with about two minutes of what I consider aimless noodling before the song really kicked into gear. So I cut out that part. I also cut out a keyboard solo section in the middle. What's left is still almost nine minutes long, and it dominated by guitar soloing. Had the band cut the song down like this, it would have been short enough to get regularly played on classic rock radio like the instrumentals "Elizabeth Reed" and "Jessica."

If those were the only changes I made, the album would be a mere 27 minutes long. However, I also added some songs. In 1974, Gregg Allman put out a double live album. It's good, but generally features songs from his first album and Allman Brothers hits, and even some guest turns. There was nothing there that I decided fit here. However, he did have one really excellent song done as a piano demo in 1974 called "Bring It on Back." A fuller version would eventually appear on his 1977 solo album, but I prefer the simplicity of this version. I think it makes an ideal final track.

Meanwhile, Dickey Betts released a studio album in 1974 called "Highway Call." This is often considered the best album of his solo career. I picked the three songs from it that I liked the best, and thought would fit here the best. "Long Time Gone" was performed by the Allman Brothers Band in concert a fair amount in 1975 and 1976. I would have preferred to use one of those versions, except I didn't find any version that I liked as much as the studio version. (Mostly that was due to sound quality issues - there aren't many great soundboard bootlegs from this time period.)

I might have just used the official cover, except I found an alternate I liked. For the band's 1975, some alternate artwork was made for concert T-shirts and handbills and the like. I took some of that art, cropped it to make a square shape suitable for an album cover, and did some cleaning up of some blurry areas.