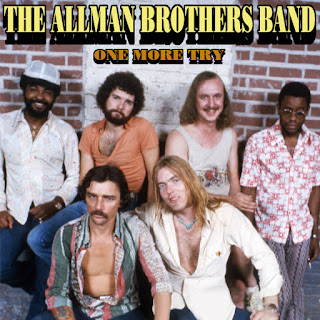 I recently posted an alternate version of the 1975 Allman Brothers Band album "Win, Lose or Draw." With this album, I continue working chronologically through the band's career, compiling all the quality studio material I think you should have if you're a fan of the band, minus their classic albums.

For the time frame of this album, the Allman Brothers Band did not exist! So I should warn you think is a collection of solo material from their two leaders and lead vocalists at the time, Gregg Allman and Dickey Betts.

Here's a quick run-down of what happened. As I explained in my write up for "Win, Lose or Draw," by 1975, the band was falling apart, split by the usual problems of bands that make it really big: egos, drugs, lifestyle excess, lack of direction, and so on. But things got even worse after that album came out. Gregg Allman was the main problem at the time. For one thing, he'd developed a debilitating heroin addiction (which he wouldn't kick until the 1980s). He also also got married to the music star Cher, and lived the Hollywood lifestyle with her in Los Angeles, away from the rest of the band. But the worst problem of all was that one of the band's roadies was arrested for drug possession. Allman testified against this roadie, basically throwing him under the bus to save his own skin, since the roadie had been getting drugs for him. The rest of the band considered this a betrayal and vowed to never work with him again.

As it happened, the band didn't stay apart for that long, reuniting for a new album and tour in 1979. But in the meantime, Allman released two solo albums (including one that was a duet album with Cher), and Betts released two solo albums. So basically this consists of what I consider the best songs from these four albums. They're generally in chronological order, but I varied that order a bit to avoid having too many songs by either Allman or Betts in a row.

There's one song that comes from another source. "Two Steps from the Blues" is a duet between Allman and Bonnie Bramlett (formerly of Delaney and Bonnie), and comes from a solo album she put out in 1976. I got the idea to add it after seeing it included on a Gregg Allman solo career best of compilation.

Also note that the Allman and Cher duet album (technically billed to "Allman and Woman") is generally considered a musical travesty. I suppose that's true. I have to admit I haven't listened to much of it, due to its bad reputation. But it has two excellent songs on it. "Can You Fool" was rightly considered good enough to be included in the 1988 Allman Brothers Band box set "Dreams." And "Shadow Dream Song" is a Jackson Browne song that isn't really a duet at all, with Cher only providing backing vocals.

In my opinion, although there are absolutely zero songs here done by the Allman Brothers Band, this sounds exactly like them anyway. Allman and Betts both had a well established sound by this time, and they knew to stick to a good thing (with the exception of songs on the Cher duet album that I've avoided). Even though it was the late 1970s with disco and new wave taking over the charts, they kept going with their exact same Southern rock thing. In fact, some of the side musicians on these albums would end up becoming members of the Allman Brothers Band when it reunited. In my opinion, a few of these songs are so strong that had they gone on proper Allman Brothers Band albums, they would have been concert staples for many years thereafter.