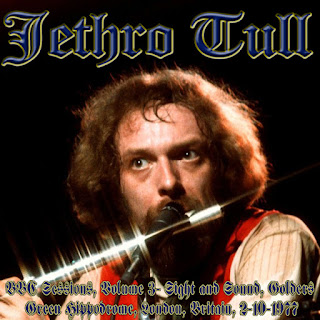 I recently posted two albums of the British band Jethro Tull at the BBC. I thought that was all I was going to post, but I had a request to post a little more from them, so here it is. The band's studio sessions for the BBC ended in 1975, at least for many years after that. But they did some full concerts in the late 1970s that were broadcast on the BBC. The 1978 has been officially released as an album, but the 1977 one is still unreleased. So here it is.

This concert took place immediately after the release of the band's album "Songs from the Wood." Naturally, there are some songs from that, as well as favorite songs from earlier albums. Lead singer Ian Anderson is fairly chatty between songs. I've put all such talking on separate tracks.

Unfortunately, this album is only 57 minutes long, which I assume is shorter than typical Jethro Tull concerts. I'm guessing the BBC slotted only an hour for this show, so it was edited down from something longer. But on the plus side, the sound quality is excellent. In fact, it may be better than the official live album from 1978, "Live: Bursting Out," which has had complaints for a less than stellar sound quality.

I didn't see any good photos of the entire band in concert from 1977, but I did find one that I liked that's a close-up of lead singer Ian Anderson, so I used that one.