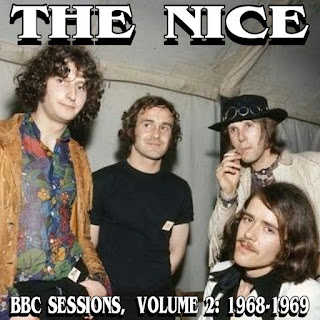 Here's the second of three albums of the Nice performing for the BBC.

I'm not a big fan of the Nice, although I appreciate that they certainly were a musically talented and innovative group. So I don't have much to say, except to point out the details of these recordings.

As with Volume 1, the vast majority of the performances here are officially released, from the album "BBC Sessions." But just as I added one unreleased song to that volume, I did the same here.

That extra song is "Get to You," which was originally done by the Byrds. It comes from a BBC studio session, so one would think it should have fit on the official album. But I suppose it wasn't included because they did the song twice. Normally, I wouldn't include two versions of the same song, except this version is drastically different from the version I included in Volume 1. The quickest way to explain how different they are is to point out that version is three and a half minutes long, and this one is eight and a half minutes long!

As with the photo for Volume 1, I don't know where or when this is from exactly. But just like that photo, this one shows four band members, so it has to be from the summer of 1968 or earlier, because the band went down to three members after that.