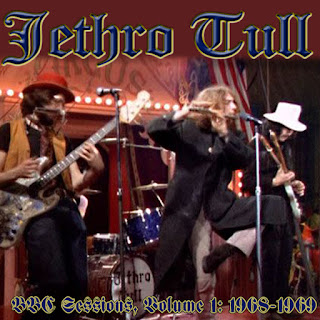 Next up in my BBC project is Jethro Tull. This is a band I do like, but even though they're a band with a long career, they didn't do much at the BBC back in the 1960s and 1970s. The band was formed in 1968, and they did do some BBC sessions in 1968, and 1969. However, there isn't much after this, so there are only two volumes in this series.

For the time period featured here, roughly the first year of the band, they were more blues based than they would be later, when they had more success. You can see that blues influence here, especially with the cover of the blues classic "Call It Stormy Monday."

All the performances here have been officially released, though rather obscurely. They come from extra large deluxe editions of the band's first two albums. Luckily, none of the songs suffer from the usual problem with BBC recordings from this time period of DJs talking over parts of the music. I'm guessing this is because they were on jazz / blues themed radio shows where the DJs were more respectful of the music.

This album is 49 minutes long.

There are surprisingly few photos of the band from this time period, at least ones where they aren't wearing unusual costumes. The one I used comes from their performance in the Rolling Stones led "Rock and Roll Circus" concert in 1968.