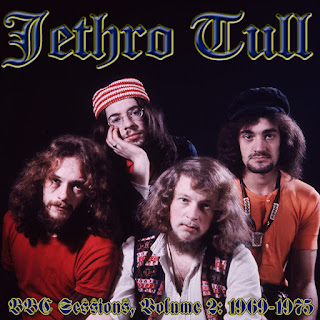 Here's the second and final of two volumes featuring Jethro Tull performing for the BBC.

The first five songs here are from 1969 and 1970, and the last four are from 1975. There's a pretty big gap there of five years. The band did a lot of BBC sessions in 1968 and 1969, and there are a bunch of other TV appearances and well-recorded concerts from those years. Then, for pretty much the entire early 1970s, which in my opinion was the band's creative and commercial peak, it seems the band did next to no promotion. Furthermore, there are very few really well recorded concerts from those years, officially released or on bootleg.

It's just my speculation, but perhaps the band did so well during that time period that they felt the music would sell itself and they didn't need much promotion. Their albums regularly made the top ten in Britain and the US, and two albums even made it to number one in the US. Then, as their sales started to go down a bit as the 1970s went on, they decided they needed to push harder, so they resorted to doing things like BBC sessions again.

I tried my best to close the gap by finding TV or radio show performances in the early 1970s, but I didn't find much. The first five songs actually aren't from the BBC, but from TV appearances in France, Germany, and Britain. All of them sound fine, but only "With You There to Help Me" is officially released, on an obscure compilation of performances from the German "Beat Club" TV show.

Speaking of what's released or not, the band did two BBC sessions in 1975. Unfortunately, they mostly did the same songs. Tracks 7 through 9 have been officially released. "Requiem" is the one from the other unreleased session that's different, so I added that one.

These are all the BBC studio sessions, at least until many years later. However, the band played full shows that were broadcast on the BBC in 1977, 1978, and 1980, and have done more occasionally in the many years since then. The 1978 show has been officially released as "Live at Madison Square Garden 1978." My interest in the band's music declines a lot after around that time. But I could post the 1977 show as a Volume 3 here if there's enough interest.

This album is 52 minutes long.

The cover photo dates from around 1970. I don't know anything more than that.