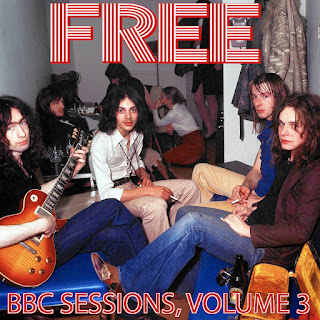 Here's the third and final album of Free at the BBC. This one was trickier to put together than the other two.

Free didn't last that long, compared to other bands like them. Formed in mid-1968, the band made it big in 1970 with their classic hit "All Right Now." But then they broke up in 1971, due to personality conflicts. However, they reunited in 1972 and put out more music, only to break up for good in 1973. A key figure during these troubled years was lead guitarist Paul Kossoff. He had a growing drug addiction problem, and the band's condition rose and fell with his successes and failures with beating that addiction. Eventually, drugs got the best of him, and he died in 1976 at only the age of 25.

The band continued to put out quality albums during this time, with a live album in 1971, then studio albums in 1972 and 1973. But on stage they were hit or miss, with Kossoff often unable to perform well, or sometimes failing to show up at all. Perhaps because of that, the band only had two BBC sessions in 1971, and none after that. So their last two years as a band aren't as well represented in this series.

That's not to say that aren't represented at all. During the band's first break-up in mid-1971, lead vocalist Paul Rodgers formed a new band called Peace. This band played a few concerts, but didn't last long, since Free reunited in early 1972. However, during Peace's brief existence, they did play one BBC session. It's never been officially released, but it exists with good sound quality on bootleg. Two of the three new songs they did, "Heartbreaker" and "Seven Angels," would be put on a Free album in very similar versions, though they would go on their 1973 album instead of their 1972 one. "Like Water" would be done by Rodgers next band, Bad Company, in 1977.

There are two famous songs the band did towards the end of their career: "Heartbreaker" and "Wishing Well." I wanted to include both, so this BBC series could also serve as a "best of" for the band. For "Heartbreaker" there was no problem because it was done during that Peace BBC session. But I couldn't find any instance of "Wishing Well" played on TV or radio shows. So instead I found the best sounding concert bootleg I could find with that song on it, from late 1972, and used that version. I stripped out the audience noise at the end so it would fit in with the sound of the other songs here.

So yeah, this volume was a little more tricky to put together. This time, only five of the 11 performances have been officially released (tracks 2 through 6). I also wanted to include "The Stealer," another key song for the band. They never did it in the studio for the BBC (though there's a live version on Volume 2), but I found an unreleased version from another TV show appearance. And "My Brother Jake" was done for the BBC, but for some reason wasn't included on the official album.

By the way, for the songs "Be My Friend" and "Ride on a Pony," the official album included several takes. They did the song a few times before they felt they got it right. I found these extra versions unnecessary, especially since most of them were incomplete. So I only picked what I considered the best take of each one. For "Be My Friend" that was take 2, and for "Ride on a Pony" that was take 5.

The cover photo shows the band hanging out backstage in 1972.