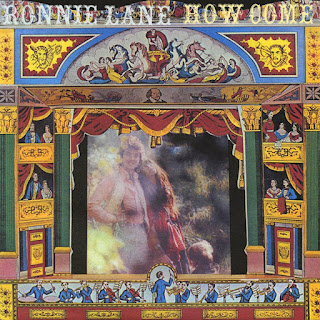 I must admit that although I like the Faces, I'm not a huge fan of the band. I suppose lead singer Rod Stewart annoys me somewhat. However, I am a huge fan of Ronnie Lane, who was a key member of the Small Faces, then the Faces, and also had a solo career.

Lane left the Faces in 1973, after the band's "Ooh La La," album. The Faces never really recovered from this, even though he wasn't their main songwriter. They lingered on for two more years and recorded some more singles, but never put out another album. Meanwhile, also in 1973, Lane put out his first solo single, "How Come," which reached number 11 in Britain. (It made zero impact in the US, because he was pretty much unknown there.) He followed this with his first solo album, "Anymore for Anymore," in 1974, and more solo albums after that.

It's turns out there's plenty of material for a stray tracks album covering Lane's solo output from 1971 to 1974. Naturally, his hit "How Come" has to be included, since he didn't put that on any of his studio albums. Many songs here are Lane's solo versions of songs he wrote for the Faces. Sometimes he got to sing them with the Faces, and sometimes Rod Stewart sung them. But either way, his solo version have a different feel, generally with more of a folky vibe.

Another key piece are some songs from the album "Mahoney's Last Stand." This was an album Lane and fellow Faces member Ron Wood did together for an extremely obscure movie. For some reason, the movie and its soundtrack wasn't released until 1976, but all the songs for it were recorded in 1972, so I'm treating them as songs from that year. Most of the songs on the album are background music-type instrumentals, and others are written and sung by Wood, so I'm only including four songs here that are dominated by Lane. One of those songs, "Chicken Wired," also appeared on Lane's 1974 solo album, but in a significantly different arrangement.

There are a couple other songs here, such as a B-side ("Done This One Before") and a cover of the 1972 Rolling Stones song "Sweet Virginia." Add it all up and you get an album that's 52 minutes long.

Sadly, Lane didn't have a very successful solo career, and "How Come" was his only major solo hit. He suffered multiple sclerosis, which already started to seriously physically affect him by 1977, and he died in 1997. But he kept recording and playing music into the 1990s despite his problems. I'll have more albums to post from him eventually.

For the cover art, I used the cover to the "How Come" single. It's extremely ornate and strange for a singles cover. (And I wonder if the photo of him in the middle has some kind of 3D or hologram effect to it?) One strange thing about it is that neither Lane's name nor the song's name show up anywhere on it. So I added both of those at the top.
Posted by Paul at 5:56 PM