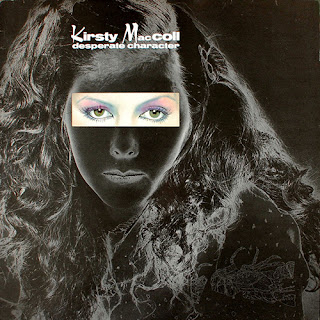 "Desperate Character" is MacColl's first album, from 1981. I normally don't post official studio albums, but I'm doing so here for two reasons. One, the album remains unfairly obscure and out of print. And two, I've added four songs at the start which are from two singles she put out in 1979. This makes a big difference, because all four songs are very good, and the first one, "They Don't Know," is an all-time classic (and a good example of her songwriting ability).

Unfortunately, MacColl was half-hearted about her solo career for about the first ten years of it, rarely playing concerts and doing little promotion otherwise. She was shy, and spent more of her time singing backing vocals on dozens of famous records instead. So she helped Tracey Ullman have a top ten hit with "They Don't Know" in 1983. She even re-sang the "Baby!" yell near the end of the song when the music stops for a couple of seconds, because Ullman couldn't sing that high.

I'm also posting this here because it was MacColl's only album until 1989. Once I post the next couple of stray tracks albums, you'll have all of her music prior to 1989, which has never been properly collected in one place.

The cover art is just the official album cover.
Posted by Paul at 3:59 PM