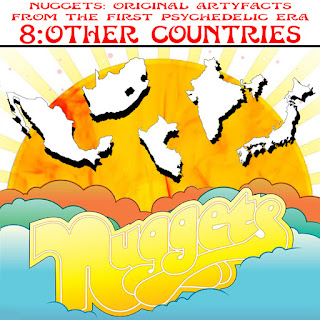 If you've been following this blog, you may have noticed that I've been posting a series of various artists "Nuggets' compilations. Basically, I really liked the two Rhino Records "Nuggets" box sets of garage rock from the 1960s and early 1970s, but I figured there was a lot of good music they'd left off for various reasons, and I tried my best to expand on them.

I organized things into eight collections of my own, organized geographically. This is the eighth. Here's how I did it:

I've posted all of that here, except for the first two. I've been waiting on those because they're huge. The US one has over 400 songs and the British one has over 200. If there's interest, I could try to figure out how to subdivide that into more manageable album-sized chunks, so I could post it here. Frankly, I find the music outside the US and Britain more interesting, because it's just as good yet far less known.

Anyway, what "Other Countries" means is it's a grab bag dealing with all the countries not included in the previous seven compilations. Seven of the 16 songs here come from South Africa, which makes sense because it's a country with a big English speaking population culturally tied to the rock music culture of the US and Britain.

The rest of the selections are generally more strange. There are songs from India, Uruguay, Peru, Brazil, Chile, Mexico, and Japan. (I've included the countries of origin in the "comment" field of the mp3 tags for those who are curious.) I must admit that I have a strong bias in favor of English language songs, so I can understand what they're about. But a couple of songs I enjoyed so much that I included them even though they're in other languages.

A good example of this is "Jaan Pehechaan Ho" by Mohammed Rafi, which is kind of a Beatles knock off, but put through a very Indian filter. I recommend you watch the YouTube video for it. It's a hoot, and understandably has had over five million views. The video was even prominently featured in the 2001 movie "Ghost World."

A couple of the artists here are much more deserving than the song or two included here. That's especially the case for "Os Mutantes," a Brazilian band I adore. There's a ton of great Brazilian music in general, but that's beyond the scope of the "Nuggets" series, as it's mostly different genres of music. I only included one song from them because it was on one of the original Rhino "Nuggets" box sets. Los Shakers are also an interesting band. They were slavish Beatles clones in Uruguay, but they happened to be very good at it, with real songwriting ability (despite a limited grasp of English). I have a best of album from them. But I only put two of their songs here, to give a taste of what they were about.

I'm sure there are tons of great songs out there that I've missed. The further one goes from the US and Britain, the harder it is to pluck "nuggets" from obscurity. For instance, I know almost nothing about garage rock type music from India, but if "Jaan Pehechaan Ho" is any indication, there must be some other gems out there. If anyone has recommendations of songs I should add, please let me know.