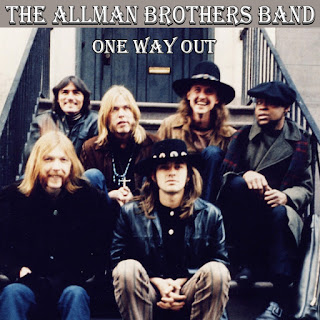 Here's another album of stray tracks from the Allman Brothers Band. This one just covers 1971, from the part of the year when guitarist Duane Allman was still alive.

The band had a pretty limited repertoire of songs. Instead of playing lots of songs, they focused on a small number, but varied their soloing and instrumental interplay dramatically. That said, they did do some songs that didn't appear on their studio albums.

The first three songs here are well known by fans of the band because they appeared on the classic live album "At Fillmore East," which was both recorded and released in 1971. No studio versions are known to exist. So what I've done is take versions other than the ones on that original album and removed the crowd noise to make them sound like studio tracks. I carefully chose versions that didn't have a lot of cheering over the music to better make it sound like studio versions. I did the same with the fourth song, though it is much less known since the band played it very rarely and it didn't make it on "At Fillmore East."

The fifth song, "Blue Sky," is a different case. This is one of the band's most famous songs, and it would appear on the 1972 album "Eat a Peach." However, this is a special version because it's a live performance, at excellent soundboard quality, that was played while Duane Allman was still alive. So I figured this version is significant enough to merit inclusion.

The bonus track is a similar case in that it's a live recording with excellent sound quality, and with Duane Allman playing a key role. But the song, "Dreams," is one where there are lots of other live versions with Duane on it, so it's not so special. Thus, I only made it a bonus track.

If you add up all the songs not including the bonus track, it's 42 minutes of music, which was a typical album length for that era.

Regarding the album cover photo, I don't know where or when it comes from. However, the photo shows the band members in their 1969 to 1971 heyday when Duane Allman was in the band.
Posted by Paul at 8:11 PM