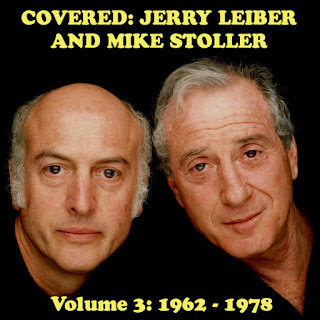 Here's the third and last of three volumes containing the best songs from the songwriting team of Jerry Leiber and Mike Stoller.

If you look at the mp3 tags, the first nine songs are from 1962 or 1963. The last eight songs cover a much greater time range, 1964 to 1978. What happened? For one thing, the Beatles hit it big in early 1964, totally changing the music scene. But also, most successful songwriters tend to have a "golden age" or a decade or two, followed by a long, slow decline. This follows that pattern.

In putting this series together, I haven't limited myself to songs co-written by Leiber and Stoller. If either of them were credited, or if there were others as well, I figure those songs are fair game too. One example of that is the country classic "Jackson," which was co-written by Leiber, but not Stoller.

An unusual song from a songwriting point of view is another all-time classic, "On Broadway." It was originally written by the great team of Barry Mann and Cynthia Weil. However, they showed it to Leiber and Stoller, and they made major changes, so all four of them were credited. I'll post a "Covered" series for Mann and Weil later, and I would prefer not to put the exact same version of the same song on both. So I'm putting the Drifters' version on the Mann and Weil series, and I'm putting George Benson's version on this one. Both artists had big hits with the song. The same exact thing happened with "Only in America," so I'm putting different versions on this volume and the Mann and Weil series.

As I did with Volume 2, in order to use a good color photo, I had to resort to a photo that's outside the time period in question. I believe this photo is from 1987. Leiber is on the right.
Posted by Paul at 2:50 AM