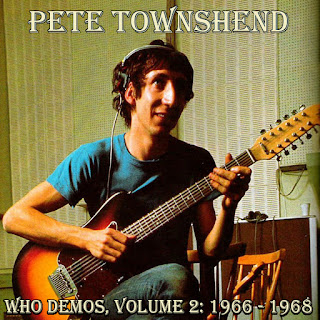 I love virtually all of the Who's studio work, but I especially enjoy this era, roughly covering the "A Quick One" and "The Who Sell Out" albums, plus assorted singles. It seems we only are lucky enough to get a random grab bag of demos from this time. It so happens that most of the songs are from 1966, and just one song - "I Can See for Miles" - is from "The Who Sell Out." Hopefully, many more of Townshend's demos will be officially released someday. There also is one demo - "Sensation" - that's an early version of a song from the 1969 album "Tommy."

Only five of the songs here have been officially released, all of them on the demo compilations "Scoop" and "Another Scoop." But that's okay, because the other songs generally have a similar sound quality. One exception is "I'm a Boy." The sound quality for that one is pretty good, except there's a fair amount of popping and crackling. I'm guessing someone recorded an acetate record, which quickly degraded each time it was played. But the song is still worth inclusion, especially because it's a lot longer than the single, and has some extra lyrics.

Some of the other songs have significant differences with the Who versions, for instance "Magic Bus" and "Dogs." But, generally speaking, these demos aren't like normal demos in that they sounded good enough to be released at the time.

I'm not sure when or where the photo for the cover art comes from. But clearly Townshend is playing a 12-string guitar in a studio. Based on his appearance, I'd guess it's from 1966 or 1967. Oh, by the way, the photo ended right above Townshend's head. I did a little Photoshop work to extend the background higher.
Posted by Paul at 6:39 PM