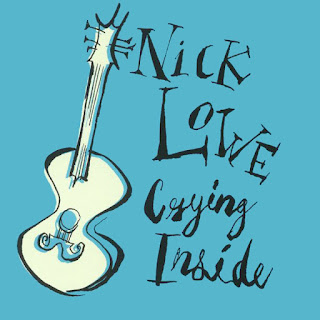 I rarely post music that has been first released in the past couple of years, because I don't want to discourage sales of new albums. But I'm making kind of an exception here.

Nick Lowe has had a long and successful solo career, and has found a successful niche for himself after significantly changing his style to a more mellow and sophisticated music since the 1990s onwards. But he hasn't released a studio album since 2013, and even then, that was a Christmas album. So why the long wait?

It turns out he actually has released the equivalent of a new album in the last couple of years. It's just that he's unfortunately released it in dribs and drabs. Most of it has come out on two EPs, one released in 2018 ("Tokyo Bay") and the other in 2019 ("Love Starvation"). I think this is a strange and bad decision. EPs, or "extended plays," have never been a popular format. So I've taken the four songs each from those EPs and added four other songs to create an album that's 39 minutes long.

Luckily, the two EPs and the extra songs all have a similar sound that's very much in keeping with the mellow sound Lowe has favored since the 1990s. Thus, all the songs sound as if they fit together. Also luckily, two of the extra songs are studio releases on other people's albums. The other two extra songs are unreleased performances from a concert, but it's a concert that was broadcast over the Internet, and the sound quality is excellent. I've been able to remove the crowd noise from those two songs, so they pretty much sound exactly like all the others.

This is the album that Lowe should have released earlier this year. I imagine that none of these will be released on future albums of his, except possibly the two live ones. So if you like the older and more mature Lowe style, you definitely need to listen to this.

By the way, I have a lot more of Lowe's solo material to post. Now that I've finished posting four Rockpile stray tracks albums (with Lowe featuring prominently in them), I'll get to those soon, in chronological order. But I wanted to get this out first.

The cover art I've used for this album is a mystery to me. I randomly stumbled across it while surfing the Internet. It comes from a single release of the song "Crying Inside." That song is on one of the EPs, and the release came after the release of the EP as a repackaging of the material.  Due to coming across this art, I decided to name the album "Crying Inside" to take advantage of it.
Posted by Paul at 7:11 PM