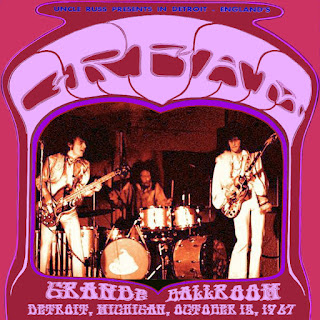 Ginger Baker, former drummer for Cream, died a few days ago. By all accounts, he was a jerk. (The interesting documentary "Beware of Mr. Baker" shows this in spades.) And yet, he had a towering musical talent on the drums. To mark his passing, I wanted to post something from Cream, and this live show came to mind.

In short, if you want one live concert from Cream, this is definitely it. This show is often on the list of best concert bootlegs of all time, for any musical act. It's the only soundboard from 1967, and when it comes to Cream concerts, the earlier the date, the better. As time passed during the band's short existence from 1966 to 1968, personality clashes, too much fame too soon, and other problems slowly killed the band's creative fire. Pretty much all the excellent sounding live recordings date from 1968 (except for this one!), including all the officially released material. But by then, while they were still able to run circles around most bands of the time, they had lost a lot from what they had been in 1966 and 1967.

So the content is stellar. But even though the sound quality is the best from 1967, it had some problems. I say "had" because I believe I've pretty much fixed them. The bootleg I own has some liner notes that note the vocals sometimes aren't heard well, and that was true. But luckily it turns out there's a lot of stereo separation on the recording, and one of the stereo tracks has nearly all the vocals. That enabled me to do some tinkering. For instance, for songs where the vocals were noticeably low, I painstakingly increased the volume for the vocals, doing so line by line.

I also fixed some obvious flaws. For instance, the first few seconds of the intro to one of the songs was cut off. But luckily, it was a riff that was repeated a few seconds later, so I was able to patch in a fix. Another song had a big sound glitch where a couple of seconds were missing, but it was another case of a repeated intro riff, so I was able to fix that too. Additionally, the band members didn't speak much before songs, but when they did the volume was so low as to be almost inaudible. I upped the volume so their words could be easily heard. I also cut out some dead air between songs, such a guitar tuning time. On top of that, the audience was nearly inaudible too, due to the recording being a soundboard that picked up only what was happening on stage. I markedly increased the cheering after each song, so it wouldn't seem like the band was playing to a nearly empty room.

But wait, there's more! ;) I believe the recording captured the entire show. But I was disappointed they didn't play "Sunshine of Your Love." The album that's from, "Disraeli Gears," would be released a couple of weeks after this concert. But the band had been playing the song at almost every concert since January, so it's surprising it wasn't played this time too. I "fixed" that by adding two songs - "Sunshine of Your Love" and "Lawdy Mama" - at the end from another concert earlier in 1967. The sound quality of these two songs are nearly good as the rest, especially because I made some edits to make the vocals more audible in that case as well, especially for "Lawdy Mama."

Cream really stretches things out with their soloing. So the concert is nearly two hours long, if you include the two extra songs. The only downside is that the bass is a bit low in the mix sometimes. But if want to listen to live Cream, I'd say this is better than anything else I've heard, including the officially released live tracks.

For the cover art, I was unable to find any photos from the concert in question. However, I got lucky and found the concert poster for that very show, and it's a nice one. I used that for the album cover, except for the central photo of the band. I also had to squish the art horizontally to get it to fit. Also, I completely changed the color scheme, because the original used some colors that didn't work well together, in my opinion. I removed all the text from the bottom and replaced it with new text, since the old text didn't say what I wanted to be said.

For the central photo, I found a color photo of the band in concert at the Fillmore in August 1967. It was just about the only good color photo I could find of the band playing live in 1967 at all. I'm surprised such a well known band wasn't photographed on stage more often. If anyone knows of a better one, please let me know.
Posted by Paul at 6:11 PM