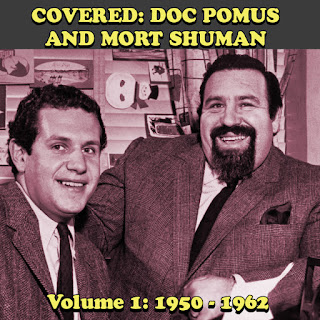 A few days ago, I posted my first "Covered" series, which is made of three albums of songs written by Jerry Leiber and Mike Stoller. I plan to post a bunch more of these to highlight the works of great songwriters. Here's the next one.

I don't think the songwriting team of Doc Pomus and Mort Shuman is as famous as Leiber and Stoller. But I'd argue they were just as commercially successful and just as talented. I don't want to go into great detail about their personal histories, since these write-ups I write are probably too wordy already. Here are the relevant Wikipedia entries:

But I will say they were unusually colorful characters, especially Pomus. There's a fascinating documentary film about his life called "A.k.a. Doc Pomus," which I recommend you watch. He had an extremely eventful and interesting life. *By the way, both he and Shuman died in 1991.)

Pomus was hit with polio when a child, and it afflicted him the rest of his life to the point that he spent most of his life in a wheelchair. He also was a white Jewish guy. Yet as soon as he became an adult, he started a career as a blues singer. He wasn't that good a singer, to be honest, but he was able to make a modest living out of it doing concerts, probably due to the novelty factor of being a white Jewish guy singing the blues, and handicapped to boot. I have two songs here from his solo career, which petered out after a few years.

By about 1956, he switched his musical efforts to songwriting. He'd had some success with that already, especially the song "Chains of Love," which was a hit for Big Joe Turner. (Note that he's not credited for writing it through, because he sold his songwriting share for a small amount of money.) Starting around 1957, he began having a lot more success.

Around 1958, Pomus met Shuman through a family connection. Pomus was in his thirties and Shuman was only 18 and had no songwriting experience at all. But Pomus saw something in him, and figured it would be good to get a teenager's perspective since his songs were mainly aimed at teenagers. Shuman quickly learned the art of songwriting and they became a very successful team. Typically, Pomus wrote the lyrics and Shuman wrote the melody. But this wasn't always the case. This can be seen by the fact that both had hits writing songs all by themselves as well.

I've chosen the songs for this series mainly because I like listening to them. But I also have tried to include all the significant hits. Luckily, the hits are usually the best songs, so it's typically easy to include them.

For this album, the only major hit I'm missing is "Young Blood," a hit for the Coasters in 1957. The reason I didn't include it is because Pomus wrote it with none other than Leiber and Stoller, before he began working with Shuman, and I've included the Coasters version in my Leiber and Stoller collection. Instead, I'm including a different version of "Young Blood" here, but it goes on a later album. (Bad Company had a hit with the song in 1976.)

I've made three albums of Pomus and/or Shuman songs. Each one of them is about 45 to 50 minutes long.

I suspect the reason more people don't know about Pomus and Shuman is because they kept a very low public profile. One result of that is that I had a hard time finding any photos of them together. All the photos I could find are black in white. So I've colorized them to help distinguish them from each other. I'm not sure what year this photo was taken, but I'd guess it's from around 1960, give or take a couple of years.
Posted by Paul at 6:57 PM