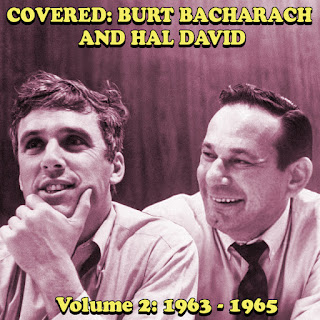 Here's the second of five albums of the best songs from Burt Bacharach and/or Hal David. Hopefully, I don't need to explain how many great songs came from their minds.

Note that, like all the albums in this series, I've tried hard to avoid including any cover versions by Dionne Warwick. It's not that I don't like her covers. In fact, it's the opposite. She had so many hits written by them that her 1960s greatest hits albums are like Bacharach-David greatest hits as well. I'm assuming any fan of this type of music already has those. It's more interesting to me to see what other artists did with their songs.

The collaboration between Warwick on one hand and Bacharach and David on the other really got going in 1963, and lasted for the rest of the 1960s. For the first album I posted, there was only one song that was a big hit for Warwick ("Don't Make Me Over"). But for this album, there's a bunch. That means I had to often try to find non-hit versions, although some songs were so good and popular that multiple people had hits with them. By the way, I think only five songs on this album weren't covered by Warwick.

01. Let the Music Play (Drifters)
02. Blue on Blue (Bobby Vinton)
03. I Just Don't Know What to Do with Myself (Dusty Springfield)
04. [There's] Always Something There to Remind Me (Sandie Shaw)
05. Anyone Who Had a Heart (Cilla Black)
06. Wishin' and Hopin' (Dusty Springfield)
07. Wives and Lovers (Nancy Wilson)
08. A House Is Not a Home (Brook Benton)
09. Saturday Sunshine (Petula Clark)
10. Long After Tonight Is All Over (Jimmy Radcliffe)
11. Message to Martha [Kentucky Bluebird] (Lou Johnson)
12. This Empty Place (Searchers)
13. What the World Needs Now Is Love (Jackie DeShannon)
14. Make It Easy on Yourself (Walker Brothers)
15. Trains and Boats and Planes (Anita Harris)
16. A Lifetime of Loneliness (Jackie DeShannon)
17. Reach Out for Me (Nancy Wilson)

As I mentioned with the first album in this series, it's easy to find photos of Bacharach by himself, but very hard to find one of him with the publicity-shy David. The photo I've chosen for this album cover seems to be the most popular photo of the two of them together when they were young. I'm not sure what year it's from, but I'm guessing its from before 1969, judging by David's receding hairline compared to other photos.

Note that I cheated a bit with this photo: I moved Bacharach and David closer together so that I could have both of them appear larger. In the actual photo, there's basically no visual overlap of their upper bodies.
Posted by Paul at 8:56 PM