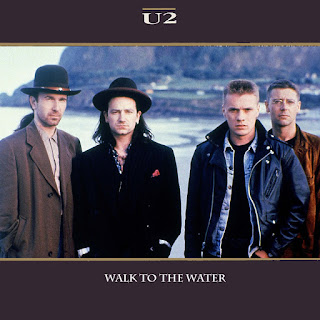 From 1980 to 1984, U2 put out four studio albums in five years. But then they didn't put out any album at all in 1985 or 1986. So it's not surprising that by the time they came out with the classic "Joshua Tree" album in 1987, they had a backlog of extra songs. It turns out they easily could have made that a strong double album, or a strong second stand-alone album. But I've gone even further than that, and made TWO extra albums they could have released in 1987. Here's the first one.

The first three songs actually date from 1986. Two of them are interesting live cover versions. The third, "Womanfish," is rather strange. U2 only ever performed it once, on a TV show where lead singer Bono was noticeably drunk. At the end of the song, Bono said, "That was 'Womanfish.' It's about a mermaid I met once, we met once in America." Whatever that means!

The fourth song is from 1986 as well. That year, U2's guitarist The Edge recorded and released the soundtrack to the movie "Captive." So far, it's the only solo album by any U2 band member. All the songs are instrumentals except one with vocals by Sinead O'Connor, co-written by O'Connor, that doesn't really belong here. I've selected just one song from the album, "Rowena's Theme."

Four out of the next five songs were released as B-sides. Also included there is "Sweet Fire of Love." This is a song from Robbie Robertson's first solo album. It's effectively a duet between Robertson and Bono, with all of U2 playing on it.

The last two songs are kind of strange. Maybe you want to include them, maybe not. The first is "In a Lifetime," a duet between Clannad and Bono. A lot of people like it, and it was a minor hit. But I consider it much more of a Clannad-sounding song than a U2-sounding one. The last song, "Lucille," is a U2 original. But it's from their brief alternate persona "The Dalton Brothers." In 1987, they actually opened up a few of their concerts pretending to be this group, a hard-core country band. "Lucille" is an over-the-top try at a generic country song. It's a real oddity for U2, but it's part of the band's fascination of America that dominated their songwriting in this time period.

U2 had a very consistent artistic look for all their releases and promotional material in the "Joshua Tree" era. I used the cover of one of their singles as a template, but I changed the text and swapped out the photo. Pretty much all the publicity photos from that time have the band standing in the outdoors looking serious and moody, so that's what I chose here.
Posted by Paul at 1:17 PM

Email ThisBlogThis!Share to TwitterShare to FacebookShare to Pinterest
Labels: 1986, 1987, U2