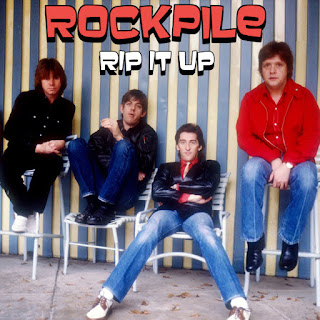 In 1980, the band Rockpile released their one and only studio album, "Seconds of Pleasure." Keep in mind that Rockpile basically was a musical alliance between Dave Edmunds and Nick Lowe. This is the fourth of four stray tracks albums I've put together of Rockpile performances that don't include performances from Edmunds or Lowe solo albums, even when they were backed by all four members of Rockpile. I also didn't include any songs that were also on the "Seconds of Pleasure," whether they were the exact same performances or not. Yet I still was able to find enough unique songs from that same year of 1980 to fill up an album of stray tracks.

The vast majority of songs here are fun cover versions, often of famous songs. Nearly all are unreleased, and come from live performances. But there are a couple of suggestions. "Loud Music in Cars" is the name of a minor hit by Billy Bremner, Rockpile's other guitarist who occasionally sang lead. The single came out in 1981, but this is a very similar demo version that was done in 1980. Also, in 1979, Edmunds had a solo hit with the song "Girls Talk," which was written by Elvis Costello. In 1980, Rockpile released "Boys Talk," which was cowritten by Lowe and Edmunds and has no similarity to "Girls Talk" except for the very similar title. It was released as a B-side.

Regarding the live performances on this album, the problem with some of them is the sound quality. Some of these were done only rarely in concert, so we only have versions from audience bootlegs, which can sound rather rough. The two roughest, "Hey Baby" and "What Did I Do Last Night" have been demoted to bonus tracks. But frankly, a couple of the others don't sound a lot better, in terms of sound quality. But I think the sound quantity issue is more than made up for by the musical performance.

Hey Baby (Rockpile)
What Did I Do Last Night (Rockpile)