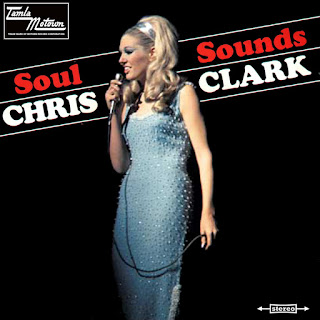 This is the second of three albums I've made of my favorite songs performed by Chris Clark. Clark is a tall, white, platinum blonde who sang soul music for the Motown label. See my previous post to get a run down of her life story.

One reason Clark never got her just due was because Motown didn't really know what to do with her. They released some sub-par stuff (often as part of Motown's strange obsession to entice the Las Vegas-esque "supper club" crowd), and they kept the vast majority of her recordings unreleased until decades later. So all but the four "Soul Sounds" songs mentioned above, plus one B-side and one other from the album, were unreleased at the time.

As with the previous Clark collection I've posted, I've tended to favor more upbeat material over ballads. Clark could sing just about anything soulfully, but I think she excelled more on the upbeat stuff. Any number of these songs should have been hits in a better world, especially the first two.

This album basically ends with four bonus tracks, even though I didn't label them as such.  Last week, when I was getting ready to post my three Clark albums, I did a double check on YouTube to see if I missed anything. I stumbled across an audio recording of Clark in concert, and it turns out it had been posted to YouTube just two hours earlier! On the plus side, the sound quality is surprisingly excellent, as good as any official album of that era. On the minus side, it's only 12 minutes long in total, plus two of the songs are versions of songs presented earlier on this album.

This is the only live Clark from her 1960s prime that I've ever heard of, so I've included it here despite the duplication of the two songs. It shows Clark must have put on an impressive live show. Hopefully, more of her live recordings will someday emerge (in the same way this live recording emerged for the first time mere days ago), and I'll be able to spin that off to an album of its own.

At first, I was just going to use the official album cover, even though the music here is mostly different. However, I realized the photo of Clark in the middle of the cover is the exact same one as the one I used for my 1965-1966 Clark album. So I did use the exact official album cover, except I swapped out the center photo for a totally different one. I think that's fitting to show that this album is similar, yet different.
Posted by Paul at 6:52 PM