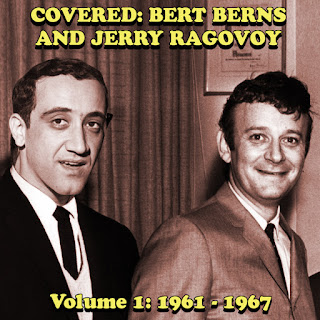 If you thought I was done with my "Covered" series, don't worry. I'm just getting warmed up! This time, I'm taking a look at two people you may not have ever heard of: Bert Berns and Jerry Ragovoy. But they were just as good as other major songwriters who are a lot more famous. Together or separately, they wrote many all-time classic songs, as you'll see below.

As usual with this series, I don't want to write up an entire essay about the songwriters. Instead, I'll direct you to their Wikipedia pages to learn more:

But what I do feel the need to write about is who did what. Some songs here, such as the classics "Cry to Me" and "Piece of My Heart" were written by Berns and Rogovoy together, but most were written apart, or with others. Still, I felt the two of them belong together in this compilation because they had such similar musical styles. Most notably, both were white, Jewish guys who were fascinated by soul music.

Of the songs they wrote alone, I would guess that there is a fairly even split here between Berns songs and Ragovoy songs. But Berns is much more famous than Ragovoy. Perhaps that's because he died very young, in 1967, due to persistent health issues, when he was only 38 years old. So he makes for a tragic figure like others who died young. Thus, there have been some documentaries about him, such as "Bang! The Bert Berns Story," but none about Ragovoy. But also, Berns was a much more charismatic figure, an extrovert, while Ragovoy was very low profile. In fact, I had a hard time finding any good photos of a young Ragovoy at all.

Regarding song selection, I could have included many more songs, since both of them were prolific2. But I've limited this to just the hits, as well as non-hits that I think are especially good. I tried to stick to the original hit versions whenever possible, though I've used non-hit versions in a few cases.

I've made two albums of Berns and/or Ragovoy songs. I'll post the second volume immediately after this one. Each one is between 45 and 50 minutes long.

I have to admit that I've cheated big time in making the cover art. I couldn't find a single photo of Berns and Ragovoy together. So I took a photo of Berns (on the right) standing with some other guy, and I replaced that other guy's head with Ragovoy's head from some other photo. I hope I haven't offended anyone with this audacity. Ragovoy's head seems unusually large and long, but from all the photos I've seen of him, that's just how he looked.
Posted by Paul at 7:03 PM