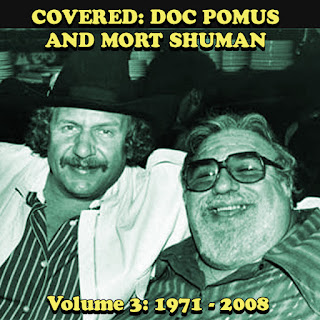 Here's the third and last of the albums I've made of my favorite songs by Doc Pomus and/or Mort Shuman.

I'm careful to say "and/or" because the collaboration between Pomus and Shuman ended in the 1960s. All the songs here are by either Pomus or by Shuman, sometimes in collaboration with other songwriters. The only exceptions are songs that were written earlier. I think the only case of that is "Young Blood," which was a hit by the Coasters back in 1957. But I'm using this hit version by Bad Company instead, because I included the Coasters version elsewhere.

The vast majority of the songs on this album are associated with Pomus. Shuman was successful as well, but he spoke French and he increasingly directed his efforts to the French market. One song here, "My Death," is his English translation of a song by Jacques Brel. He had a fairly successful solo career in the 1970s. But the vast majority of the songs he did were in French, and most of his success was in France. I've also included "Sorrow," because it probably is his best known solo song that's sung in English.

Meanwhile, Pomus continued to live in New York City. He had given up on songwriting for about a decade after losing the songwriting partnership with Shuman. As the 1970s went on, he slowly returned to songwriting, but he didn't have much success at first because he was seen as someone from an earlier era that had fallen totally out of style.

However, he eventually found a new niche for himself writing for a more mature audience. He focused more on blues, which was his original musical love anyway. He didn't have any more hits, but he gained a lot of critical acclaim for his new style. For instance, he co-wrote all the songs for B. B. King's 1981 album "There Must Be a Better World Somewhere," and King won a Grammy for the album.

Both Pomus and Shuman died of cancer in 1991. The last four songs here date from after that. Either they are versions of songs that were recorded by others earlier, or they are songs that didn't get recorded until later, for whatever reason. Irma Thomas's version of "Be You" is actually the first released version of that song, even though it was done 17 years after Pomus died.

As I mentioned with the two previous albums in this series, I've had a heck of a time finding any photos of Pomus and Shuman together. I don't know when or where this one is from, but judging by their appearance it has to be well after their songwriting partnership ended. I would guess it's from the 1970s or even the 1980s. I don't know much about their relationship after their stopped writing songs together, but based on this photo it looks like they stayed friends, even though they usually were separated by the fact they lived on different continents.
Posted by Paul at 7:50 PM