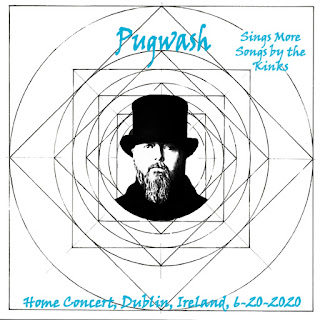 I just posted an album of Pugwash (a.k.a. Thomas Walsh) playing the Kinks' classic 1968 "Village Green Preservation Society" album at a home concert only a couple of days ago. He started by playing the songs from that album in order. Then he went on to play a bunch of additional Kinks songs. He did so many bonus songs that that portion of the concert was actually longer than the VGPS album. So I'm posting this as a separate album. It's 54 minutes long.

Please read the post I just made about him covering the VGPS album that explain Pugwash and the context of the home concert he's been doing. I mentioned a number of caveats about the sound quality, such as how he was winging it, doing these from memory, and sometimes making mistakes. Everything I said there applies here, including the problem of his cell phone ringing from time to time. After all, it's  the second half of the exact same home concert.

As far as the songs chosen, there doesn't seem to be any logic to them other than these happen to be the songs he loves the most and thus is able to play them from memory. Not surprisingly, the vast majority come from the Kinks' classic era of the late 1960s and early 1970s. The only exceptions to that are "Set Me Free," from even earlier in the 1960s, and "How Are You" and "Quiet Life" from the 1980s. Note that "Quiet Life" is only part of the song, since that's all he could remember. But I included it anyway since it's an interesting rarity.

All the songs here are the order he played them. The exception is the last four songs, which don't come from this concert at all. As I mentioned in the other blog post, he's been doing one home concert at week since the coronavirus pandemic began, and from time to time he played Kinks songs. The majority of those were the same songs he did in this home concert, but these four songs were not repeats, so I've included them. They have the exact same sound quality, since they were recorded in the exact same conditions.

For the album I just posted, of Pugwash playing the "Village Green Preservation Society" album, I used the Kinks' cover art as the basis for the Pugwash version. For this album, I thought it would be fun to do something similar. I noticed that he played the most songs from the Kinks' 1970 album "Lola vs. Powerman and the Moneygoround, Part 1." I believe there are six songs from that album. Luckily, it turns out that album cover only had one person's head on it, of the band's main singer and songwriter Ray Davies, so it was easy for me to change that to the head of Pugwash's Thomas Walsh. Then I changed the text, using the same font color and type as the original album.
Posted by Paul at 9:54 PM