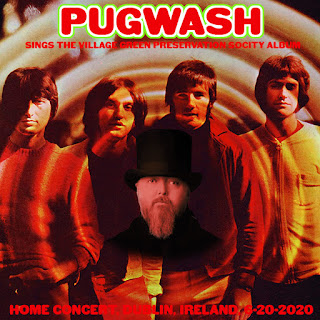 I'm a big fan of Pugwash. That's essentially Thomas Walsh, since he writes and sings all the songs, and is the only current member. (From now on, I'll call Wash "Pugwash," since that's how he seems to prefer it, much like Gordon Sumner of the Police calling himself "Sting.") I've posted two albums here of the Duckworth Lewis Method, a band composed of Walsh and Neil Hannon from the Divine Comedy that exclusively sings songs about the sport of cricket. But this is the first album I've posted just of Pugwash.

Pugwash has been releasing albums since the early 2000s, which makes that band a relative babe in the woods compared to the other musicians I typically post about here. But Pugwash is heavily influenced by music from the 1960s and 70s, most especially the Beatles, the Kinks, and Jeff Lynne of ELO. So to ease listeners in to hearing his own music, I thought I'd start with him doing covers by his musical heroes.

It turns out that Pugwash knows a remarkable number of cover songs on the guitar. He probably could do hundreds by memory. It also turns out that he's been extremely musically prolific during the coronavirus pandemic lockdown. He's been putting on one home concert per week, every week since the lockdown began. And not short shows either. He typically has played between two and three and a half hours each time!

During these shows, he's systematically played all of his songs from all of his albums, as well as a similar number of cover versions from a wide variety of artists. I plan on posting a lot more of that material in the future, but I wanted to start with his Kinks covers, because he did a concert of nothing but Kinks covers just a couple of days ago. He started by playing the entire classic 1968 album "Village Green Preservation Society," which I'm presenting here. Then he did even more Kinks songs, which I will soon post a separate album for.

As with all his 2020 home concerts, all these songs just feature Pugwash on acoustic guitar. I've removed all the talking between songs, because he tends to ramble a lot, and I don't find his comments that illuminating. However, there's one story he told during this concert that I want to pass on. Although Pugwash hasn't ever hit it big with commercial success, he's made enough notice to be able to meet many of his musical heroes, including Jeff Lynne and Ray Davies, the main singer and songwriter of the Kinks. He related a story in which he did some studio recording with Davies in recent years. Afterwards, he, Davies, and some of his band members retired to a nearby pub for some drinks. After everyone had a few pints, he offered to sing the entire "Village Green Preservation Society" album, start to finish, with Davies and the band members joining along. That's exactly what happened, and apparently Davies had a lot of fun taking part in that. My only comment is, what a lucky bastard, to be able to take part in that!

Anyway, before I finish here, I want to make a couple of caveats. Although Pugwash has put on very long home concerts each week, he's done them in a spontaneous manner, usually singing whatever song that pops into his head. Sometimes he's remembered all the chords and words, and sometimes he hasn't. He's often stopped midway and started again, or sometimes just gave up. He's also forgotten some chords or mangled the lyrics. Furthermore, he's had some health problems in recent years that included him partially losing his hearing, so he's occasionally gone off key without realizing it. Furthermore, he's Irish and speaks and sings with an accent that includes him pronouncing "th" as just "t."

Finally, I find it extremely annoying that he always does these home concerts with his cell phone nearby. And that damn phone rings a LOT! As in every few songs. Why he doesn't just put the phone away for the duration of the concert is beyond me. I've tried my best to fix the cell phone ringing sounds during songs whenever I can. I fixed most of them. However, on this album, there are a few instances I couldn't fix, because they happened during vocals that weren't repeated elsewhere. Mostly this happens in the last few songs. Sorry about those.

Anyway, please take this album in the spirit of someone just having fun winging it, much like singing songs around a campfire. This isn't meant to be a professional, polished sort of thing. If you take it in that spirit, and you enjoy the Kinks, you should enjoy hearing this solo acoustic version of what I consider to be one of the greatest albums of all time.

Does the album cover look familiar to you? I hope it does. I took the Kinks' "Village Green Preservation Society" album cover and gave it a Pugwash twist. I added Thomas Walsh's head to the circle of darkness in the middle of the cover, and tilted it red to match the overall look. I also changed the text, including replacing the "Kinks" name at the top with "Pugwash" in the exact same font style and color.
Posted by Paul at 9:29 PM