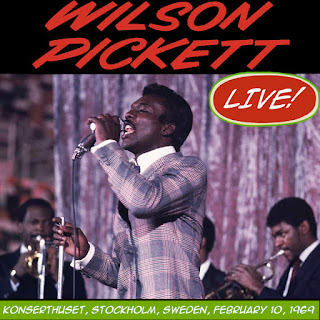 I'm a big fan of the soul music of the 1960s and 70s, and I wish there was more of that to post here. But I haven't found so many "albums that should exist" in that genre. But here's one. For some strange reason, there's only been one official release of a live Wilson Pickett album, and he's one of the all-time soul greats. That one album dates to 1974, and it's generally disliked. Pickett's career went on a sharp decline after 1971 for various reasons.

Happily, I've found this bootleg recording, from his peak years. (One might argue there has been a release of it, but it's one of the legal grey area releases that just package and profit from somebody else's bootleg recordings. Even that "release" is very obscure.) The reason we have this is because a lot of musical acts that played in Stockholm, Sweden, in the late 1960s had their concerts broadcast on the radio, and this is one of them. (I posted a Traffic concert from 1967 that's another example of this.) The sound quality is excellent, what you'd expect of an official life album from the era.

The concert is rather short, at 48 minutes total. But he played two concerts that night (this is the second one), and this is almost certainly all that he did. The last song fades out. I didn't do that, but I read that's because a radio DJ talks over the very end of the concert, so nothing important is lost.

I must admit that I didn't include two songs at the start. That's because they were generic soul instrumentals to get the crowd in a lively, dancing mood before Wilson Pickett came on stage. I did keep one instrumental that at least is a known instrumental hit ("Soulful Strut"). Then there's one minute of some emcee talking over the chord changes to "Light My Fire" before Pickett finally hits the stage.

There's one other quality bootleg I know of, of a concert in Germany in 1968. Other than that, there's pretty much nothing from his peak years of the 1960s and early 1970s, other than a couple of official live tracks. I consider that strange, since Pickett was such a charismatic guy who seemed at home on the stage.

I couldn't find a good color photo of Pickett in concert in 1969. But I did find one of him singing in Minneapolis in 1968, so I used that. For his name at the top, I took the font and colors from a 1960s concert poster. I also got the "Live!" part from that.
Posted by Paul at 5:38 PM