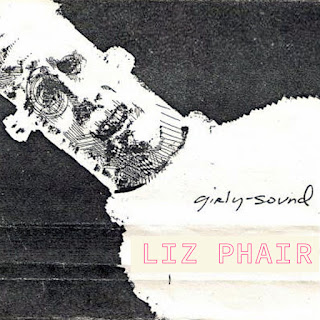 Liz Phair is mainly known for her 1993 album "Exile in Guyville." But she put out some dodgy albums in the 2000s, and then hardly put out any new music in the 2010s, so her popularity has gone down a lot. She has a new single out which is supposed to lead the way for a new album in 2020. I hope that sparks a career revival for her. Personally, I think she's done much more than just that 1993 album, and I plan on posting a few different things from her to make that case.

Starting with this. Before "Exile in Guyville," there were the 1991 "Girly-Sound" tapes. Basically, she made three self-produced cassette tapes of solo acoustic demos of her songs and shared them with friends. They were so good that they got spread around far and wide, and their success led to her getting the record contract for "Exile in Guyville." Allmusic.com has called them "one of the most popular and sought-after alternative rock bootlegs of all time."

For many, many years, the "Girly-Sound" tapes remained officially unreleased. But Phair used songs from them for later albums: "I go in there and rip stuff off - it's like a library." That's especially the case for "Exile in Guyville," which redoes 11 of the songs using a full band. There's a Wikipedia page on "Girly-Sound," and it has a handy chart showing which songs were later redone for which albums, which you can see here:

A lot of people want to listen to all of the "Girly-Sound" songs in their original versions. If that's the case for you, the whole thing was finally officially released in 2018, so you can just get that. But I've done something different for those who aren't such die-hard fans: I've removed all the songs that were redone later. On top of that, I've only selected the remaining songs that I liked. The "Girly-Sound" tapes were just a collection of all the songs Phair had at the time, and she has admitted that some of them weren't ready for prime time.

Here are the songs that weren't redone later which I felt weren't strong enough to include:

Maybe you're familiar with some of those and feel like they shouldn't have been left out. If you make a strong case, I might put some back in. But what I have here is strictly my own personal selection.

So that's what's left out. But I've also added a song, "Fuck or Die," that was part of the original "Girly-Sound" tapes but was left off the 2018 official release. I assume the reason it was left off is because parts of the song borrow heavily from Johnny Cash's "I Walk the Line," and there were difficulties in getting the legal rights. (She liberally borrows snippets of melodies from other people's songs for some of the other songs on the album.)

With a ton of songs removed and one song added, the end result is an album that's 49 minutes long, which is a good length for an album. The first song is with a full band, but the rest are acoustic. I've kept the song order the same as on the original tapes.

Again, this isn't for everyone. But if you want the "best of what's left" version, this makes for a pretty strong album.

The "Girly-Sound" recordings were originally divided into three cassettes, as mentioned above, and each cassette had its own cover art, designed by Phair. Instead of using a photo of herself, she went in a weird artistic direction. I picked the cover I liked the best out of the three. I only made one change. She had the words "Girly-Sound" on it twice and her name not at all. So I pasted over one of the "Girly-Sound" mentions with her name. The bit I pasted in comes from another one of her early cassettes.
Posted by Paul at 11:11 AM