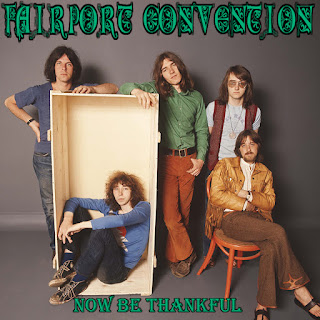 It's been a while since I've posted any Fairport Convention music. To be honest, I consider Sandy Denny and Richard Thompson to be musical greats, and when both of them left the band, my interest drops drastically. So far, I've posted most everything I have from the start of the band through the end of 1969, when Denny left. But Thompson remained for another year, and I have three albums covering that. This is the first of those three, a stray tracks album.

For most of Denny's tenure in the band, the band was heavily influenced by American folk rock. But they took a sharp turn towards traditional English folk music in 1969, and deepened that in 1970. So a large number of the songs here are covers of traditional songs, with an emphasis on instrumentals.

The first four songs are from the studio, with one bonus track, one BBC performance, and two sides to a single. The rest all come from live performances. I tried not to use performances from official live album "House Full - Live at the L.A. Troubadour," since that's a very good album as a whole. But there were three songs available with high sound quality there that I couldn't find anywhere else. Two more live songs come from other official albums. That leaves just three from bootlegs. But those three come from a soundboard show, and sound just as good as the rest. With all the live tracks, I stripped the audience responses to make them sound like studio tracks.

The cover art photo comes from a 1970 publicity photo shoot. I found several like this, with different band members posing inside the box. I went with the one showing Richard Thompson in the box.
Posted by Paul at 6:40 PM