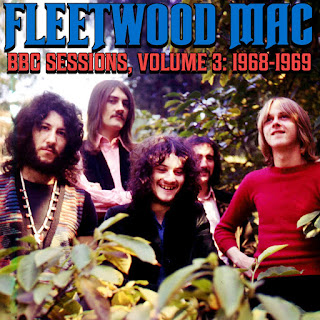 This is the next album in the Fleetwood Mac BBC series. It's the third out of six. I'm going to try to post one a day until I'm done. Please see the post of the first album in the series for a general explanation.

For this album, Fleetwood Mac was still neck deep in the blues. As with the previous two albums in this series, I've included BBC performances by Chicken Shack, so long as the lead singer is soon-to-be Fleetwood Mac member Christine McVie. There's only one case of that here, "Mean Old World." Fleetwood Mac did their own version of that song on the first volume in this series.

For the previous album in this series, the vast majority of the performances were unreleased. This time, only four of the 15 are unreleased. But the sound quality of those are just as good as the rest.

Although this series is mainly about Fleetwood Mac at the BBC, I figure if there are performances of them on other radio or TV shows, those are fair game too. Those are few and far between for this era, but on this album I did include one song that comes from the band playing for a French TV show.

The one bonus track this time, "Evenin' Boogie," sounds particularly bad, in my opinion. But I've included it as a bonus track since it was done at the BBC. There's a version on the "Mr. Wonderful" album with much better sound quality.

I don't know when or where this photo for the album cover was taken exactly, but it's said to be from 1968. It has Danny Kirwan in it I believe (wearing the red shirt) and he joined the band in 1968.
Posted by Paul at 7:04 PM