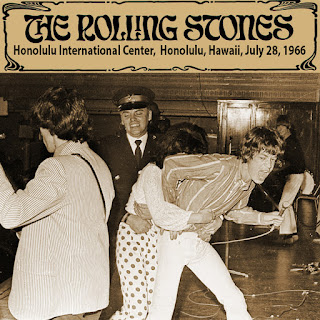 Here's a concert bootleg that you'll either think is great or awful, depending on your feelings about the sound quality.

The reason you might think it's great is because it's a document of the Rolling Stones playing live in 1966, and this is the best sound quality of any concert recording of the band prior to 1969. (The one  exception is the live BBC recordings I posted recently, but that is from 1964, and the band changed a lot by 1966.) There's an official live album released in late 1966 called "Got Live If You Want It," but this sounds much better than that. It's an actual soundboard, broadcast by a radio station in Hawaii at the time. You can actually clearly hear the band playing, and not mainly just girls screaming, which is the case on the official live album and all other bootlegs from that era.

That's the good news. The bad news is, if you compare this recording to typical live albums in the decades since the 1960s, the sound quality is pretty bad. You have to bend your ears and take into account that recording standards were very different in 1966, and we're lucky to get this decent recording at all. The Stones actually were recorded several times by other radio stations in that era. For instance, French radio broadcast their concerts when they passed through Paris in 1965, 1966, and again in 1967. But even those recordings sound way worse than this. The Stones at the time were much like the Beatles, where they couldn't even hear themselves on stage for all the screaming.

So it's all relative. It's much like the Beatles, actually, in that it's hard to find good live recordings of them from this time as well, due to all the screaming. I think this is actually better than most Beatles live recordings since the screaming is way down in the mix. But still, the sound can be rough at times.

Another downside to this recording is that it's so short. It's only 27 minutes long. That's because the concert was that short. Again, just like the Beatles at the time, the Stones played on a bill with lots of opening acts, and only did about a half an hour set. So this really is the whole thing. I considered adding some bonus tracks from other concerts around that time to give it a more decent length, but the sound quality was so much worse that I decided against it. There are some decent recordings of TV appearances that weren't lip-synced, but I plan on posting those separately at a later date.

Oh, by the way, this was the last concert of the band's 1966 world tour, which is why Mick Jagger says it's their last concert ever in his between song banter. So it's Brian Jones' last live appearance as an effective musician. He did play live on some later occasions, with the last being at the "Rock and Roll Circus" in 1968, but after 1966 he pretty much stopped playing guitar and dabbled with exotic musical instruments, if he played anything at all. He slid downhill so much that the rest of the band often just disconnected his amplifier. So this, plus the BBC stuff I posted earlier, are the only good examples of what Jones sounded like in concert back when he still had his shit together.

For the album cover, I wanted to use a color photo. But I had a surprisingly difficult time finding any good ones of the band in concert in 1966. The best ones I could come up with were all from TV appearances, where the band was looking sedate in a very clean and orderly situation, almost like photos of them relaxing in the studio.

So instead I went with this black and white photo to better show the utter craziness of their concerts at the time. This one comes from a concert in Wellington, New Zealand, in February 1966. Some frenzied fan is grabbing Mick Jagger while a police officer tries to pull her away. I believe that's Bill Wyman's back to the camera, while Brian Jones can be seen off in the distance, just past Jagger's head. This concert was so nuts that one girl fell from a balcony and was so hurt that she later had to have her legs amputated.

Also, the band name text and the framing at the top comes from a tour guide give out during their 1966 world tour. I squished the framing vertically, and added the text about Honolulu.
Posted by Paul at 12:18 PM