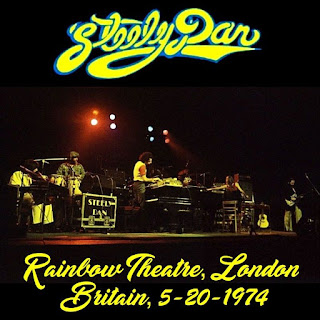 In the 1970s, Steely Dan was known as a band that liked to perfect their songs in the studio. After just a couple years of success, they stopped touring altogether so they could focus entirely on their studio work. But they actually were a cracking live band for the limited time they played concerts. This concert took place during their last tour in the 1970s.

I'm not an expert on the band, but I've looked around and it seems to me this is their best concert recording, mostly due to sound quality. If you want just one Steely Dan live album, I recommend this one. This even beats the one officially released live album of the time period, "La La Land." That was released in 2019. But they picked a show that had some mixing problems. The sound quality on this is arguably better, even though it's a bootleg, and this concert was 25 minutes longer (at an hour and 22 minutes).

Steely Dan are known as the duo of Walter Becker and Donald Fagen. But at the time of this concert, they had a full crack band with the likes of Danny Dias, Jeff "Skunk" Baxter, Jim Hodder, Jeff Percaro, and Michael McDonald. (By the way, that's the same Michael McDonald who would become the star lead vocalist for the Doobie Brothers, but here he just assisted on keyboards and backing vocals without his distinctive gruff vocal sound.)

In terms of sound quality, this soundboard sounded so good that I didn't have to do much. But I did boost the volume of the banter between songs, and well as cutting out some of the dead air, such as tuning and noodling. There wasn't much to cut though.

By the way, the last song, "This All Too Mobile Home," was never attempted in the studio. It remains officially unreleased, except for the version on the above-mentioned "La La Land" live album.

PJ of his "Albums I Wish Existed" blog once again helped make the album cover. While the photo is a bit dark and murky, it comes from the exact concert in question.