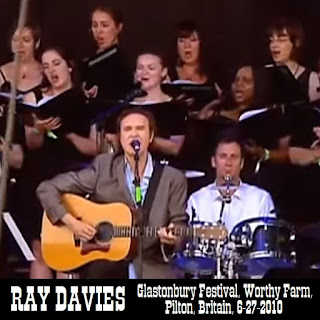 In 2009, Ray Davies, the lead singer and main songwriter for the Kinks, released an album called "The Kinks Choral Collection." As you can guess from the title, he did Kinks songs with a full-sized choir.

This concert is from a year after the release of that studio album, but he kept going with the choir concept. As you can see from the album cover, he played the massive Glastonbury Festival with a full-sized choir. (The cover only shows a part of the choir.)

One thing that's really great about this concert is the sound quality. I'm a big Kinks fan, and I've taken a close look at the Ray Davies solo concert bootlegs out there. Very few are soundboards or have soundboard level quality, but this one does, because it was professionally recorded and filmed for a webcast.

The other thing that makes this stand out, of course, is the use of the choir. He only used a choir for that 2009 album and the subsequent tour. They do add something if you're looking for different takes on the usual big Kinks songs.

This concert recording is 57 minutes long. I believe I'm missing two songs played near the start of the concert, "I Need You" and "I'm Not like Everybody Else." If you have those, please let me know so I can add them in.

The cover art was made by PJ of his "Albums I Wish Existed" blog. I took a screenshot from a YouTube video of the exact concert in question, then PJ turned it into the cover.