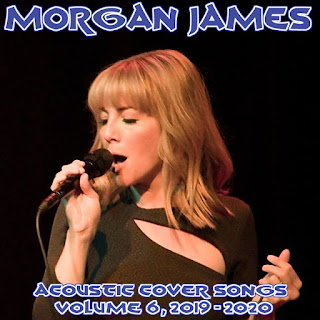 QUICK NOTE 1: due to my recent computer problems, I won't have access to Photoshop for about two weeks (when I plan on getting a new computer), so I can't make new cover art for these albums until then. I'm going to try to post some albums where I do have the cover art already, but there's only a limited number of those, and this isn't one of them. If anyone is interested in making cover art while I can't, and you think you have the artistic skills for that, please contact me. I'd love the help.

QUICK NOTE 2: I'm writing this a couple of days later. Peter from his great "Albums I Wish Existed" blog saw my note above and volunteered to help make the album covers I don't have until my computer situation gets sorted out. So a big thanks to him. But if anyone else also wants to help out, please let me know.

This is the sixth and last album in my series of Morgan James acoustic cover songs... kind of. What I mean by that is, she has performed an even greater number of acoustic cover songs in 2020, which she calls "Quarantunes," where she played 100 new (for her) cover songs in 100 days. This album contains all the acoustic covers she did in the last year or so that I could find and that are NOT included as part of her Quarantunes series. I'll be posting a separate series of albums for that. So, if you like this kind of thing from her, there's a lot more to come.

I've mentioned it before, but I'll mention it again: one thing I really enjoy about her acoustic covers is the breadth of her source material. That can be seen especially clearly for this particular album. She covers songs dating from the 1930s to the 2010s, doing everything from show tunes to country to soul, and more.

As usual, it's just Morgan James on lead vocals, with her husband Doug Wamble on acoustic guitar and sometimes backing vocals. Wamble has a bigger role singing on a few of these than usual, enough for me to credit the songs are duets.

Also as usual, all the songs are officially unreleased, and come from YouTube. The only unusual thing to note this time, I think, is the performances of the last two songs. James is terrible at playing guitar, but on "These Boots Are Made for Walkin'," she attempted to play guitar for the first time for any of her videos. Her minor flubs, or near flubs, made her and Wamble laugh a lot. For the last song, "We Belong," she attempted that as a request despite being totally unprepared for it. She and her husband managed to get through most of it, until they finally broke down laughing.

Here's a list of the artists that originally made these songs famous:

As I mentioned above, Peter from the "Albums I Wish Existed" blog made this cover art. He wanted to keep the same look going for the rest of the albums in this series. Unfortunately, he didn't know the font type for that, and I don't know either since I don't have a working version of Photoshop at the moment to check my files of the other covers in the series. So he copied and pasted the artist name from one of the other albums. Then he wrote the rest of the text in the same font.