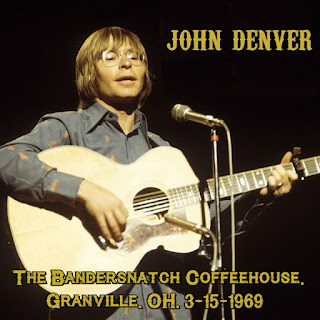 First off, I have to say I'm not that big of a John Denver fan - I generally like him at about a greatest hits level - and you don't have to be a big fan of his either to enjoy this concert. (Though of course you'll probably like it even more if you are.)

This is atypical of Denver's usual stuff for a few reasons. The first and most important is this concert dates from before his first official studio album, which was released later in 1969. So you get almost none of the songs on his typical "best of "albums, with the exception of "Rhymes and Reasons."

Instead, what you get is basically a covers concert, with only four originals out of the 18 songs here. Denver started out as a folk singer in the early 1960s, and was a member of the Chad Mitchell Trio (a folkie group in the mold of the Kingston Trio or Peter, Paul and Mary) from 1965 to late 1968. This concert caught Denver during a pivotal change in his music career. His solo career was only a few months old. He'd written "Leaving on a Jet Plane" a few years earlier, and Peter, Paul and Mary would have a number one hit with it, but not until late 1969. He wouldn't have any hits of his own until "Take Me Home, Country Roads" was a number one hit in 1971. As a result, at the time of this concert, Denver was a virtual unknown outside of a limited folkie crowd, and he was playing in small clubs.

So, in my opinion, this is less of a typical John Denver concert and more of a snapshot of the folk music scene in 1969. Folk music was huge in the early 1960s, but that morphed into folk-rock around 1965,. True folk music plummeted in popularity in the late 1960s, with garage rock, psychedelia, country rock, and all sorts of other musical trends dominating instead. But the folkie types would have a big comeback in the early 1970s, with the rise of the singer-songwriter movement, led by the likes of James Taylor, Cat Stevens, Joni Mitchell, Carole King, and many more. Denver covered most of the big names as of 1969, like Tim Hardin, Joni Mitchell, Gordon Lightfoot, Tom Paxton, and Leonard Cohen.

Another unique aspect of this concert is that it's just Denver and his acoustic guitar. After he hit it big with "Take Me Home, Country Roads" in 1971, he almost always played with a full band. It wouldn't be until the 1980s and after when he occasionally played in the solo acoustic format again. But by then, of course, the set list would be almost entirely different. Plus, he would never play as a relative unknown for such a small crowd again. This almost has a "John Denver playing on a front porch for a group of friends" feeling.

But what really makes this concert stick out for me is the fantastic sound. It's incredible to me that Denver was a minor musical figure at the time who didn't even have a record contract, and yet three of his 1969 concerts were recorded as pristine soundboard bootlegs. I plan on posting all three, because they're all excellent and they have very different set lists. You can learn more about how the recordings came to be, and the songs on it, here:

Apparently, members of a different folk group in the Cincinnati area recorded the concerts on a reel-to-reel, with Denver's permission, so they could learn to cover some of the songs he was performing.

Unfortunately for the listener, only selected songs from these three concerts have been made public. I found many of the songs as high quality FLAC files. But then I found a similar, but sometimes different, selection of songs from the concert on YouTube. Last.fm appears to have an accurate set list of the concert, here:

So I've used that to reconstruct as much of the concert as I could. As you can see from that list, only 18 out of the 38 songs played that night have been made publicly available. But that's not such a big loss, because the vast majority of the missed songs got played in the other two recorded concerts that I also plan on posting.

But there were some problems with this concert recording. While the sound quality is excellent, the audience applause was often quickly faded out. So I've tried my best to fix that. On some of the songs, there were slow fade-outs of the applause. I boosted the volume bit by bit, essentially undoing the fade out. In other cases, there wasn't much to work with, so I patched in applause from other songs in the concert that had complete audience reactions.

A more troublesome problem was that I'm guessing much of the talking between songs was also edited out. The high quality FLAC versions of the songs almost always had the banter cut out. Luckily, the slightly lower quality YouTube versions often did have the banter. Thus, often, I used the music from the FLAC files and the banter from the YouTube versions. Even so, Denver is a talkative guy, and I'd surmise that he said at least something before virtually every song. I'd guess that maybe half of those are missing.

It seems Denver played long concerts in that era. Although we're missing more than half of the concert, what we have is still an hour and 11 minutes long. This sounds just like a full concert. There's enough surviving banter to get a good feeling for his personality and charisma.

Note that the final songs, "Sticky Summer Weather," might or might not have been from this concert. According to the above link, it is from this concert. But it's the one song that doesn't appear on the seemingly very accurate set list at setlist.fm, nor does it appear on the set list there for the two other recorded 1969 concerts. I stuck it as the last song because I otherwise would have had two tracks of banter in a row.

Here's the list of the original artists for each song:

I'm happy to say that PJ (a.k.a. Peter) from his great "Albums I Wish Existed" blog has volunteered to help make the album covers I can't make for the next couple of weeks, until I get a new computer. There don't seem to be many good photos of Denver from 1969, since he wasn't famous yet. So Peter made this one from a 1970 photo at an unknown location.