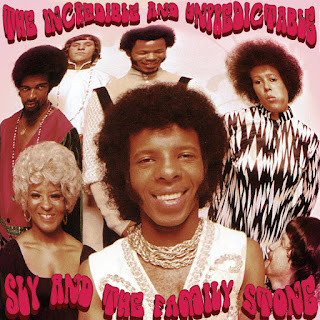 In May 1969, the Sly and the Family Stone album "Stand!" was released. In November 1971, that band released the album "There's a Riot Goin' On." Both albums are great, and are on Rolling Stone Magazine's list of the top 500 albums of all time. But that's two and a half years between albums. Today, a gap like that would be typical, or even slightly speedy. But in that era, that was an eternity. Most bands released an album a year. Heck, in 1969, Creedence Clearwater Revival released three hit studio albums of mostly original material!

It turns out there were plans for an album in between. In the March 19, 1970 issue of Rolling Stone Magazine, an article about band leader Sly Stone stated: "Now he's finishing up an album, the most optimistic of all, with Sly Stone having gauged his power around the country. He'll call it 'The Incredible and Unpredictable Sly and the Family Stone.' It's a line out of one of Epic's publicity releases last year."

But the months passed, and no new album emerged. However, the band was still very popular. They released three hit singles in late 1969 that didn't appear on any album: "Hot Fun in the Summertime," "Everybody Is a Star," and "Thank You "Falettinme Be Mice Elf Agin." But at the same time, Sly Stone was falling deeper and deeper into serious drug addiction, and was becoming increasingly erratic and unproductive.  For instance, he became notorious for showing up late to his band's concerts, if he showed up at all.

As a result of a lack of progress on a new album, the record company decided to put out a "Greatest Hits" album to give the fans something while everyone waited for a new album. It contained the three stand-alone hits, plus earlier hits, and was a huge seller.

I've decided to try to put together a 1970 studio album instead. But even though the proposed album had a title, I don't think it ever got to the point of having a song list. There already has been a big Sly and the Family Stone box set, but only one relevant unreleased song appeared on it. So what I've done is taken pretty much every good song from the band I could find up through and including 1970 and gathered them into an album. It's not THE lost album spoken of in that Rolling Stone article, but it's full of quality songs and makes for a great listen just the same.

I started with the three hit songs mentioned above. Then I added in outtakes from the previous two albums which have since appeared as bonus tracks and/or on the box set, plus the song from the box set. All those songs make up most of the album. I also added "This Is Love" from the band's 1974 album "Small Talk." I could be wrong, but I understand the band was running low on new material at the time, as Sly Stone's drug problem got worse, so they used this track that was actually recorded in 1969 or 1970.

But on top of that, I've added in three songs that technically aren't Sly and the Family Stone songs at all. What was a band song is somewhat fluid. Although Sly Stone was the leader, it was a genuine band, and many songs had prominent lead vocals by other band members. I figured if a song was written or co-written by him, was produced by him, and was performed and sung by him and/or other members of the band, that was good enough for me. He actually spent some of his energies during that long gap between albums coming up with songs for his female vocalists, who were called "Little Sister." I've included the two songs they released that he wrote. I've also included one song by Abaco Dream, which wasn't a real band at the time, but instead was the name for a collaboration between soul singer Joe Hicks and Sly and the Family Stone.

If you add up all those songs, it makes 43 minutes of music, which is an ideal album length for the era. Even though many of the songs are album outtakes, I think most or all of them are as good as the songs from those albums. So this makes for a very good album, especially with the three classic singles included. If the record company was smart, they should have put together an album just like this.

Note that there's another music blog that has made an album with the same name and general idea. You can find that here:

The song list is significantly different though, for both double album and single album versions. Some different outtakes were used, and live versions were used too. Many of the songs used date back to 1967. I limited my choices to just songs from 1968 to 1970.

Luckily, I made an album cover before my recent computer troubles. I took a promotional photo of the band from around 1969 and added a fish-eye lens effect to distort it. Then I added some psychedelic lettering which I also warped. Hopefully, the result mimics the "psychedelic soul" album covers of that era.

Email ThisBlogThis!Share to TwitterShare to FacebookShare to Pinterest
Labels: 1968, 1969, 1970, Sly & the Family Stone