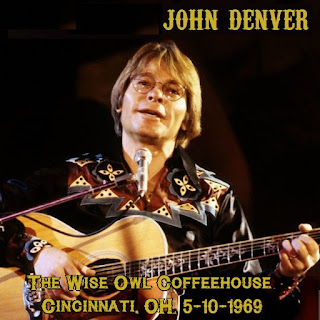 This is the third and final of the 1969 solo acoustic concerts I'm posting. If you're going to listen to just one, you might want to check out this one, because at an hour and forty minutes it's the longest of the bunch by half an hour.

I'm already written what these are about in the blog posts for the two previous concerts in this series. I'm summarize very briefly here: these concerts stand out for their remarkable sound quality, since they're excellent soundboard bootlegs. All but three of the songs are covers.

I find this to be an interesting peek at someone who was just another little known folk singer at the time, but who would soon become a household name. When this concert took place he'd just signed the record contract for his first solo album. It wouldn't be until 1971 when he had his first hit with the number one hit "Take Me Home, Country Roads." However, one could already hear his exceptional talent and charisma in this concert. And although there are only three original songs here, one of them is "Leaving on a Jet Plane," which would be a number one hit for Peter, Paul and Mary later in 1969.

Even though this concert is an hour and forty minutes long, it's not the whole thing. As with the other two 1969 concert recordings, the person who recorded it has only made some of the songs available to the public. There are 24 songs here, but setlist.fm lists 12 more songs played that evening.

One interesting aspect of the concert is how much he was into the Beatles. Of course, it probably was hard to find someone who didn't enjoy the Beatles in 1969. But in addition to the three Beatles songs on this recording, he played four more: "Blackbird," "Hey Jude," "Here, There and Everywhere," and "Lady Madonna." I'm sure that was unusual for a folk singer in that era, or any era. Perhaps his love of the Beatles helps explain his own later success as a songwriter.

This is a list of the original artists for each song:

PJ of the "Albums I Wish Existed" blog helped me with the album cover yet again. Like the other two in this series, there don't seem to be any good color photos of him in concert in 1969, so this one dates to 1970.