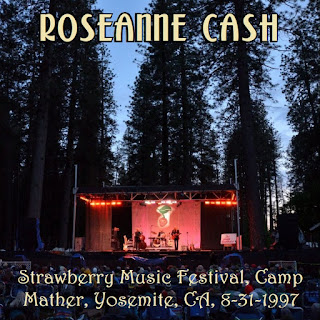 Musical associate Lil Panda recently posted this elsewhere on the Internet. I did some minor editing, mainly boosting the vocals for the banter between songs. But I didn't have to do much, because the sound quality is fantastic.

This is a really great Rosanne Cash bootleg concert, partially because of the sound quality, but also because of the set list at an interesting time in her career. In 1996, Cash put out the album "10 Song Demo," which consisted of acoustic demos. She didn't tour much to support it in 1996, and in 1997, according to setlist.fm, she only played two concerts. In 1998, she started to record a new album, but that was halted when she developed a polyp on her vocal chords. She was unable to sing for nearly three years. She didn't come out with another album until "Rules of Travel" in 2003.

So this concert is a peek at what might have been, had she continued to record and perform into 1998. After her acoustic 1996 album, she was back to rocking for most of this concert, with some acoustic moments thrown in. She played "September When It Comes," an original song that would first appear on her 2003 album. Furthermore, she did a full-band version of "Western Wall," which also would appear on her 2003 album.

She also played the nice original "Greg and George." Weirdly, she would never release this as such, except in 2013 she had an obscure Internet-only release for charity of the song "Jim and George," which is nearly identical in all respects except for the slightly changed title. (I put that on the stray tracks album "Land of Dreams.")

She also played some rare covers, such as "Then You Can Tell Me Goodbye," "Wouldn't It Be Loverly," and a long, jammy version of the Beatles' "Things We Said Today."

When she returned to playing concerts in 2003, her set list was significantly different. She said goodbye to many of her older songs and moved into more of a folky direction. So this concert caught her at a time of transformation.

This concert is an hour and 25 minutes long.

Perhaps the reason that Cash played this concert in a year when she didn't go on tour was because of its unique and remarkable location, in the middle of Tuolumne Meadows in Yosemite National Park! She commented on this several times during the concert. I couldn't find any photos of her at the concert, or even good photos of her on stage from around 1997 at all. So instead, I decided to show the concert stage for the cover art, since it is so unusual. This photo doesn't feature Cash, and I don't even know what year it's from. But it is the stage she played this concert on, and she mentioned it was a night concert, so I picked a photo of it at night.

Once again, I was assisted by PJ of "Albums I Wish Existed," who turned the photo into an album cover. I asked him to highlight the tall trees as much as possible. He did, but the square shape of the album cover can't do the trees justice. They tower much higher off the top of the picture frame.