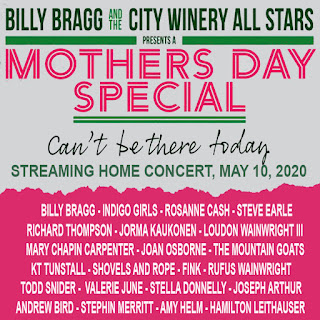 In late March 2020, singer songwriter Billy Bragg wrote a song about the difficulty of being separated from loved ones during the coronavirus pandemic lockdown. He called it "Can't Be There Today," and posted it on YouTube. From that, he came up with the idea to have a special home concert on Mother's Day, May 10, 2020, to help people celebrate that day in these weird times. The concert is named "Can't Be Here Now" as a play on that song title.

A lot of the best singer songwriter types joined in, recording one or two songs from wherever they happened to be hunkered down, and then sending in their videos. So I think this is unique in my music collection in that this "concert" has no fixed single location. Some of the musicians spoke a little bit before or after their songs, and others didn't. Most of the songs have some connection to a mother's day or at least a mother theme, but a few do not. It's a pretty loose gathering of performances, with no fixed rules.

No less than seven of the artists are ones that I've posted albums of here at this blog: Mary Chapin Carpenter, Rosanne Cash, the Indigo Girls, Jorma Kaukonen, Joan Osborne, KT Tunstall, and Loudon Wainwright III. There are some other big names for this type of music as well, such as Bragg, Steve Earle, Rufus Wainwright, and Stephin Merritt of the Magnetic Fields. I have to confess that I wasn't that familiar with the others, but hopefully if you listen to this you'll discover some new artists, just as I have.

Since this is a collection of home recorded videos, the audio quality is variable. I did my best to adjust the volume and improve the mix whenever I could. The result is pretty good overall. But there were a couple of significant problems I couldn't fix. Valerie June recorded her song in the great outdoors. That looked nice on video, but late in the song a big gust of wind came along and blew on the microphone for about thirty seconds, rendering that part of the song unlistenable. Luckily, it was just a repeat of the chorus, so I was able to salvage the song by editing that part out. Some of her talking had to be cut out due to more wind.

Also, the Indigo Girls played their best known song "Closer to Fine." But the vocals of the lead vocalist Emily Saliers was way down in the mix compared to the guitar and the other vocalist Amy Ray. I couldn't do anything to fix that, so it's a rather unusual version.

The concert is nearly two hours long. If you don't like some of the artists and/or songs, you can edit your version down to just the ones you do like, and you'll probably still have a fairly lengthy album.

Oh, and by the way, I just posted the fourth of Norah Jones's home concert albums a day ago. It turns out I missed including one song and got the name of another song wrong. So if you've downloaded that one, I recommend you do it again, now that I've fixed those things.

The video of the entire concert is on YouTube, if you want to watch it as well as hear it. (Just search for key words in the title.) So I could have used screenshots from that. However, if I did that, I would have to favor some artists over others, since there's no way I could fit them all in without having them look tiny. So instead I used the playbill that was promote the show. I made some changes, including squishing the entire thing horizontally to make it fit into a square space. I also redid the names of the artists, since there were about four of them that joined in late and so didn't get mentioned. But there's all mentioned here.
Posted by Paul at 7:17 PM