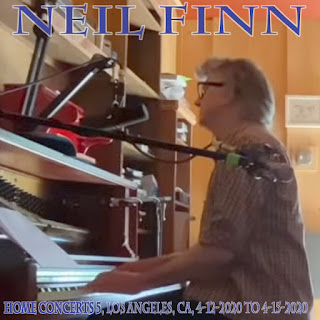 Neil Finn has stopped doing new home concerts for a while. I checked his website today and found out that's because he's taking two weeks off in order to record new music with Crowded House. Hopefully that'll go well and he'll be back to his daily recordings soon. In the meantime, it gives me to catch up with what he recorded already. This is the fifth album of his home concerts I've posted here. I have two more to go before his recent break.

Compared to his other home concert albums I've posted, there are relatively few cover versions this time. This one has "Everybody's Talkin'" by Fred Neil / Harry Nilsson, "Man of the World" by Fleetwood Mac, and "Lola" by the Kinks. "Lola" is performed by both Neil Finn and Jimmy Barnes. (Barnes is a huge musical star in Australia, but has only had one hit in the US, the song "Good Times" done with INXS.) Barnes sent his contribution remotely, since he was doing his lockdown somewhere else. There also are versions of Split Enz and Crowded House songs like "Sweet Dreams" and "Four Seasons in One Day."

In terms of sound quality and length, it's basically the same as all the previous albums in this series. If you like those, you'll like this one too. By the way, note that some of the songs chosen are especially fitting for the coronavirus crisis, such as "Recluse" and "Isolation."

The cover art is a photo of Finn at home during the lockdown, playing a piano. It's not the greatest picture, but I figure it's something different instead of having him holding a guitar in the other photos in this album series.
Posted by Paul at 7:20 PM