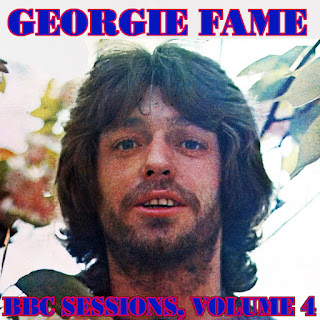 Back in May 2022, I posted three volumes of British singer Georgie Fame at the BBC. At the time, I thought I was done. I'd noted that there was evidence he'd done more BBC sessions around 1969, but I was unable to find them. Now I've found them, thanks to the help of musical associate Marley. There's enough for a whole new Volume 4.

Previously, I'd only been able to find three of the performances here. Those had been on "Volume 3" in this series. So at the same time I'm posting this, I've reposted that volume with those three songs removed. If you want this, I recommend you redownload that volume too.

Here's the link for that:

Everything here is officially unreleased. Two of the songs, "You Can't Do That" and "Am I Wasting My Time," are solo performances for a BBC TV show in 1969 that Fame did with Alan Price called "The Price of Fame." The rest are all BBC studio sessions. Most of those come from "Top of the Pops" transcription discs. These are very rare, I don't think this material has been shared on the Internet for many years. But they also have great sound quality.

Not surprisingly, these recording faced the usual problem of BBC DJs talking over the music. In fact, every single song other than the two done for the BBC TV show mentioned above had the DJ talking problem, as you can see from all the "[Edit]" mentions in the song titles. But I used the X-Minus audio editing program to wipe out the talking, as I usually do.

The collaboration between Fame and Alan Price that started with that 1969 TV show continued and deepened, resulting in a 1971 album they did together. I've already posted an album of their duet BBC sessions. But I've found more of those, enough to split that album into two. I'll be posting that material soon.

This album is 36 minutes long.