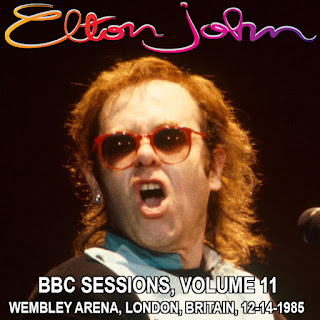 Here's yet another Elton John BBC concert. Already we're at "Volume 11" and it's still only 1985 moving forward chronologically. There's more to come, for sure.

The previous volume featured a concert from 1982. Just in the three years since then, John continued to crank out the hits, having Ten Top success with "I Guess That's Why They Call It the Blues," "I'm Still Standing," "Sad Songs (Say So Much)," "Passengers," and "Nikita." He plays all of those here, plus other then recent tunes. So there's a lot differing this concert from the previous one. But even more of the concert is filled with his classic hits, as well as cover of the Motown classic "Can I Get a Witness."

Note that he did a BBC concert in 1984 as well. But I've skipped that one because the sound quality is significantly worse than this one. I doubt that was the BBC's fault. More likely, it was recorded off the radio in less than ideal conditions. This one doesn't sound awesome, but it's definitely very listenable.

This concert is an hour and 53 minutes long. That's another advantage this one has over the previous volume in this series. The true BBC portion of that one is only 59 minutes long.

The good news is the cover photo was taken at the Wembley Arena in December 1985. But he did multiple shows, so I don't know if the photo is from this exact show.