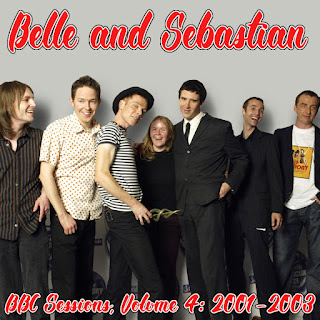 Here's the fourth of many volumes of Belle and Sebastian at the BBC.

This is composed of studio sessions. The first four songs are the only officially released ones, from the album "The BBC Sessions."  The fifth song was played on a BBC TV show. The next five songs are from another BBC session. The last two aren't from the BBC at all, but come from a KCRW radio session instead.

The next two BBC sessions are still within this time frame, with a live show from 2001 and a long BBC session in 2002.

The cover photo shows the band at an awards show in 2004. I didn't like the back wall, which had a bunch of advertisements on it. So I replaced it with a blank wall in Photoshop.