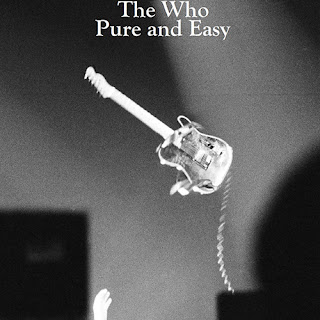 For the Who, 1971 was the year Pete Townshend's vision of a concept album called "Lifehouse" collapsed, but from the pieces came the classic album "Who's Next." There are a lot of other people with blogs such as this one who have made their own versions of "Lifehouse." For instance, I recommend the version by soniclovenoize, which you can find here:

Instead of trying to do that sort of thing yet again, I decided on another approach. Sometimes, I like to hear "Lifehouse." But other times, I just like to hear "Who's Next," since it's what I grew up with. So I've come up with a companion album to "Who's Next." Just like that album, it treats all the 1971 songs and just songs and not as pieces in a larger concept.

Unfortunately, there are a few "Lifehouse" songs that the Who never got around to recording, or the recordings have been lost to time. I consider these as Who songs in spirit, so I've avoided putting them on any of my stray tracks Townshend albums. I refer to "Teenage Wasteland," "Greyhound Girl," and "Mary." Since Townshend typically sang on a couple of songs per Who album, just imagine these are the ones he sings on this album.

Clearly, in 1971, the Who were at their peak, both in terms of songwriting and performance. It's understandable that the band gave up on "Lifehouse" as being too ambitious and put out "Who's Next" instead. But it's a shame that they only put out a couple of the remaining songs at the time as A-sides or B-sides, because even the leftovers make a five star album, in my opinion.

Thanks to The_Lifehouse for the cover art.
Posted by Paul at 3:04 AM

Email ThisBlogThis!Share to TwitterShare to FacebookShare to Pinterest
Labels: 1971, Pete Townshend, Who