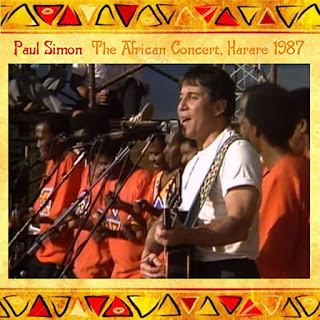 Paul Simon has just released a new album, "In the Blue Light," so here's something in celebration of that. For once, this isn't a gathering of stray tracks, but a complete concert.

If you enjoy his "Graceland" album, you should enjoy this. Not long after that album came out, Simon wanted to put on a concert for the black South African community that musically inspired him. However, he wasn't allowed to perform in the country of South Africa. So he held a concert as close as he could get, in the neighboring country of Zimbabwe. Naturally, he plays all the songs from "Graceland." But instead of fleshing out the concert with songs from earlier in his career, he gives spots to the musicians who helped him out on the album and inspired him, like Miriam Makeba, Ladysmith Black Mambazo, and Hugh Masekela. So this is a deeper dive into the South African music that lead to the "Graceland" album.

This came out as a DVD, but never a CD or album. But here it is, taken from the DVD audio.

Thanks to Peter at the Albums I Wish Existed blog for the cover art.
Posted by Paul at 11:59 PM