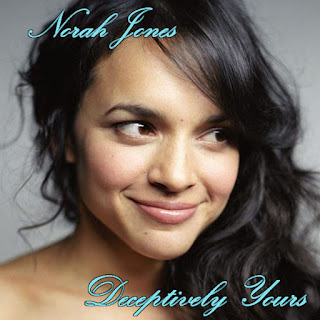 Norah Jones is a curious case for me. I don't actually like many of her official studio albums that much. Too often, she sounds like "easy listening" or "adult contemporary," with the songs fading into forgettable background music. That said, she has one of those special, distinctive voices. I don't know what it is about that voice, but I really enjoy hearing her sing, as long as she sings good songs. Unfortunately, as a songwriter, she's hit or miss, with a lot of misses.

Luckily, it turns out that Jones's career as represented by her studio albums are just one part of her overall career. She seems willing to play and sing with just about anybody. As a result, her stray track album material is MUCH more varied and interesting than what she puts on her albums. She covers songs by everyone from AC/DC to the Kinks to Soundgarden to Nick Drake, in just about every genre. Not content to coast on her huge fame and fortune, she's taken part in all sorts of side projects, from country, folk, jazz, electronica, and even something close to punk rock!

So my point is, don't dismiss Jones based on a surface impression of her big hits. She has a much more interesting career than that.

The first six songs all come from an album she did with the Peter Malick Group. It was recorded in late 2000 and should have been released in 2001, which is why I've included it with other 2001 songs. But it didn't actually get released until 2003, after Norah Jones hit it big, selling over 10 million albums. However, the album didn't have her face or name on it, so it remained fairly obscure.

Most of the rest of the songs are outtakes from her first album, the one that would go on to sell all those millions. Although most of them are unreleased, you'd never know it, since they sound just as good as any other studio tracks. One of them did get released years later, "Picture in a Frame." I'd had that on a much later stray tracks album (and I'd even used the song title for the album title!). But I've moved it here after finding out it was an outtake from the first album.

UPDATE: On June 5, 2020, I deleted two previous updates because they're moot now. Since the last update, I added three songs ("New York City," "Strange Transmissions," and "Picture in a Frame"). I also moved one song, "Something Is Calling You," to the next album in this series. Furthermore, I found out I had the wrong title for one of the unreleased songs, so I fixed that. It was called "Find My Way," but apparently the real title is "A Dream Today."

I'm not sure when the photo I used for the cover art was taken, but her haircut matches the one she had in these early years of her career.
Posted by Paul at 9:44 AM