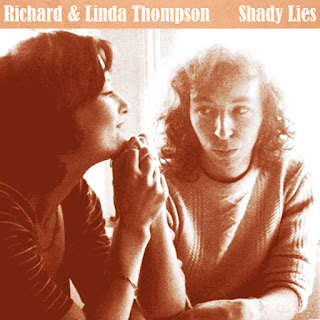 Today is the release date for "13 Rivers," a new studio album by Richard Thompson.

In celebration of that, I want to post more of his stuff. I posted one album of his a while back, but I want to start posting things systematically. That means going back to the start of his solo career around 1970, when he left Fairport Convention. (I'm dealing with that band separately.)

In 1970, Richard Thompson was only casual acquaintances with the singer Linda Peters. But by 1972, they would link up musically and romantically. They would get married that same year and she would change her name to Linda Thompson. (To be consistent, I'm not using her "Peters" name in all of the mp3 tags.) This album covers the three years of them musically joining forces. (I'm not including songs from the 1972 Richard Thompson solo album "Henry the Human Fly.")

The album starts with four songs sung by Linda, with no involvement by Richard. Elton John was paid to record some demos by various artists on the label (DJM) he was signed to at the time. Those were be passed around to other musicians to encourage them to cover those songs. Linda was brought in to sing lead on three of them. These demos all remain unreleased. (Interestingly, Elton John sings lead to four Nick Drake songs on more of those DJM demos.)

Richard sings lead on the next three songs. One of them, "Someone Else's Fancy," was a song he wrote that was an outtake for the "Henry the Human Fly" album.

The next six songs come from the 1972 "Rock On" album, by the Bunch. (The last one here is a bonus track.) This was a diverse group of British folk rock musicians. The album was all cover songs of rock and roll classics. There were four lead singers on the album. The album is a mixed bag overall, but I've selected the best songs that are sung by either Richard or Linda. I guess working on the album together was the opportunity that kindled their romance and led to them getting married later that year.

By the end of 1972, Richard and Linda started touring as a duo. The last song here is the only one on this album officially credited to "Richard & Linda Thompson," even though they both were on all the Bunch material as well.

The next album in this series will feature all Richard & Linda Thompson material from 1972 and into 1973. But even though the songs of this album come from different sources and many don't feature them together, it's all good music and important in showing how Richard Thompson's long, great solo career got started.

Thanks again to Peter of the Albums I Wish Existed blog for the cover art.
Posted by Paul at 11:12 AM