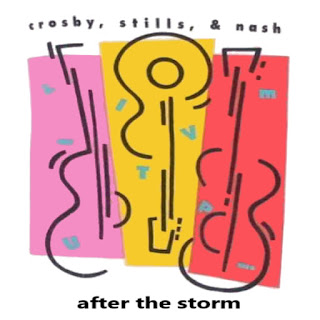 I've posted a bunch of Crosby, Stills & Nash or Crosby, Stills, Nash & Young albums so far, working my way chronologically through their long career. Here's another one, and I've got a lot more to go.

My last CSN album posted here was a revamp of their 1990 "Live It Up" album. Unfortunately, the official version of that album was poor, and the cover was notoriously bad. This album is a revamp of their 1994 album "After the Storm." Happily, the official  version album is much better, so much so that I've kept the name. The production was also better, though still somewhat problematic at times. However, there are a few duds that really bring the album down as a whole. So what I've done is replace those duds with better songs they did from the same time period.

A good example of a dud is the song "Bad Boyz." Just from the title, and especially the spelling of "Boyz," I was pretty sure I was going to dislike the song even before I heard it, and I was right. I also removed "Only Waiting for You," "Find a Dream," and "Street to Lean On." Additionally, I didn't like "It Won't Go Away" at all, but in concert it was performed in a solo acoustic style that turned a bad song into a good one, in my opinion. So I used an unreleased live version for that one.

After removing four songs, I added four. Some of the solo albums done around this time were pretty good, so I didn't want to take songs from them if I could help it. Thus, for three of the added songs, I've used unreleased versions, generally taken from concerts. But there was one song, "Yvette in English," that I thought is really good and I couldn't find any alternate version, so I've used the version from David Crosby's "Thousand Roads" album. If you have that album and don't want the duplication, just remove that song and you'll still have a solid album here.

"After the Storm" was the lowest selling album in CSN's long career. Even with better songs and better production than their last album, they were still badly out of sync with the times, and the record company reportedly gave it next to no push. But in retrospect, I think it's better than its reputation suggests, especially with the song changes. You should give it a try.

I made the cover using a graphic from a CSN T-shirt from the era of the album.
Posted by Paul at 12:58 AM