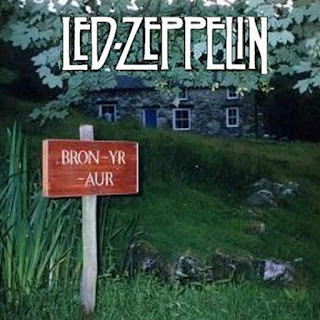 The band's third album was surprisingly acoustic in sound compared to the first two. This is connected to the fact that the band spent an extended time practicing and songwriting in a cottage in rural Wales known as Bron-Yr-Aur. This was a very creative time for the band, writing many songs not only for "Led Zeppelin III," but also a bunch of songs that would appear on later albums.

As a result, this album has some musical consistency, even though it comes from a variety of sources, both official and unreleased, and live and studio. There are a few rockers, but most of the songs are acoustic in nature.

Some songs here are very well known, especially "Hey, Hey What Can I Do," a B-side that still get frequently played on classic rock radio stations. There are a few other songs that were released on various additions of the "Coda" outtakes album. But others are obscure, some even by serious fans of Led Zeppelin bootlegs.

For instance, with the instrumental "Guitar Melody," I listened through an entire album of acoustic instrumentals from around 1970. Most of them were unremarkable, but I liked this one. It had no time, so I gave it one to differentiate it from the other acoustic instrumental on the album. There are a few bum notes played by the lead guitar. I tried to fix some of those by patching in the same note being played elsewhere in the song. But that didn't work every time, so I had to leave some of the bad notes alone.

The bonus track also deserves some explanation. The band initially recorded the rocking instrumental "Jennings Farm Blues." They recorded the song many times, and considered not only putting it on the album but also releasing it as a single. But somehow after lyrics were added it turned into the thumping acoustic song "Bron-Yr-Aur Stomp," and put it on the album. I wasn't impressed with the instrumental. However, somone on YouTube named slumpytube cleverly added just the vocals from "Bron-Yr-Aur Stomp" to the instrumental "Jennings Farm Blues." I liked that more, but it was only two and a half minutes long, while the instrumental ran  longer. So I edited his edit to include another minute and a half of some nice guitar soloiing.

I only included this as a bonus track because it's not that different from the song that made it on the album. But still, I think most fans of the band will find it interesting.

Thanks again to Peter from the Albums I Wish Existed blog for the cover.
Posted by Paul at 10:03 PM